Home > Features > Trusting God when it matters most 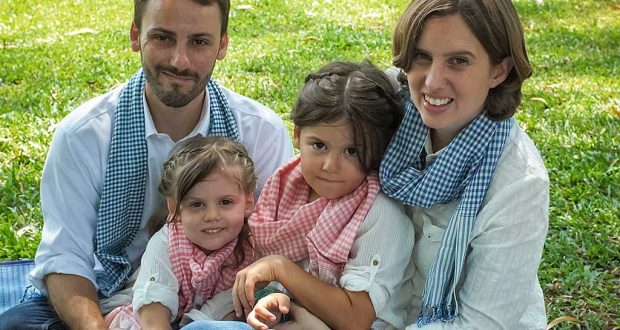 Trusting God when it matters most

Moving to a foreign country can be a huge step for anyone but it is particularly challenging for those with a young family. In 2014 Chris and Stacie Ellinger took up the challenge by moving to Cambodia with their two children, offering them an opportunity to use their community development skills and work with local Christian organisations. Chris Ellinger reflects on trusting God in difficult times and circumstances.

When we had been in Cambodia about a year and half, our elder daughter, who was six at the time, got into rollerblades in a big way. She didn’t have her own set, but she would borrow the pair belonging to the neighbour at every opportunity.

We watched without real concern—she and her sister had been riding bicycles up and down our little street since we moved in six months earlier. The neighbour had no safety gear, but we insisted she wear her bike helmet, and thought that would probably be fine.

One night at bedtime, she complained that her hand was bothering her, and showed me a little mark on her palm.

“Is it a mosquito bite?” I asked. She only shrugged, so I put some of our bite cream on it, and thought nothing more of it.

It was another three days before she finally came back, after a morning of unexplainable tears and tantrums, and said that her hand was sore and itchy.

“Your mosquito bite?” I asked. She held out her hand. The area around what I had thought was a bite was badly inflamed, and she had a track of infection running along the vein from her wrist, and half way up her forearm.

It turned out the original wound was from falling backwards off the roller-blades, and she had hidden it as it grew more and more septic, thinking we would tell her she was not allowed to skate anymore. Although I generally try to remain calm in the face of medical issues around my children, I think that day she saw the fear in my eyes.

By the time we got her to the hospital she had a fever of 40°C, and the process of cleaning the wound and sorting out antibiotics was unpleasant for everyone. However, within 24 hours the infection had retreated to a localised area around the wound, and in a week it was as though it had never happened.

Cambodia can be a place of mystery fevers, stomach bugs and unidentifiable illnesses. It’s also home to dengue fever, malaria, chikungunya, and a lot of other serious nasties. Although illness is unpleasant for us as adults (we’ve each spent a couple of weeks in bed since being here due to mosquito-borne viruses), it’s much more worrying when it’s our children who are sick. And for me, this rollerblading event triggered a lot of questions in my mind:

Was God protecting our family?

What might happen to our children, living in this place?

Could the worst occur and what would that mean?

It was a friend of mine who helped me identify the questions I was really asking in those night-time hours, when I lay awake thinking through the what-ifs and worst case scenarios:

And what does that mean anyway?

In one sense, they’re not complicated questions. The Bible says that God is love, that he is good and that he will be with us always.

On the other hand, it says some less encouraging things as well. In the book of John, Jesus promised his disciples that in this world they would have trouble. He also said he has overcome the world, but what does that mean? Paul said in Romans that “we glory in our sufferings”. The theology of that is interesting, but the implication that we will have sufferings is clear.

And we need only look around.

Ten Christian workers serving in Afghanistan were murdered by the Taliban in 2010 as they travelled between towns providing medical care. Even in our own Cambodian team, a family of six, having finished their formal language training in 2013, set out from Phnom Penh to Siem Reap to begin their ministry. Part way there, a bus crossed the centreline and hit their car. The parents and two of the children were killed. One of the children lost her arm but survived. She and her sister had to return to their home country to be cared for by their grandparents. It shocked and frightened everyone.

Suffering comes, death comes and being in the place where God has called you does not make you immune. Are there no guarantees? What do we rest on? We don’t have simple answers, though we have spent a lot of time thinking about the questions. But there is this: our children do not, in the final calculation, belong to us. We care for them and love them deeply, but they belong to God.

And while it seems it would rip us apart were anything to happen to them, we know that God loves them more even than we do, and no matter what happens, he is holding onto them. I should note that’s not an idea we always enjoy, but it’s one we recognise.

So what does it mean, to say that we trust God with our kids, but we also know that bad things can happen? Right now, it means we trust that, whatever happens—prosperity or suffering—God will be with us.

Don’t get me wrong, I still pray for the safety of my family, sometimes with something like desperation. But trusting my children to God means trusting my heart to him and trusting in the knowledge that he has overcome the world—that eternity is bigger than Cambodia, bigger than an infected wound, bigger than malaria. Bigger than death.

“Oh, you’re so brave,” people said to us when we told them of our plans to live in Cambodia. But we always rejected that because we felt called by God to be here.

Following God where he leads is not primarily about courage. It’s about a recognition that, ultimately, it is better, richer, greater to walk with him, than to walk away from him.

For her seventh birthday, our daughter asked for rollerblades—and we bought them for her. We want her to live a full life and fear is a lousy reason for saying no. But still, we pray. And we make her wear wrist guards now.

Chris and Stacie Ellinger work in Phnom Penh, Cambodia, in partnership with Connexions Uniting Church and Interserve Australia. To find out more about their work, visit interserve.org.au/people/chris-stacie