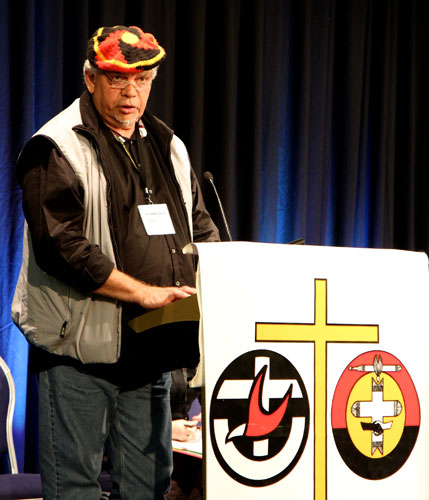 A NUMBER of proposals to the 13th Assembly related to the Uniting Church's relationship with its Indigenous members.

One proposal called on church councils, boards and agencies to uphold the views of the Uniting Aboriginal Islander Christian Congress (UAICC) as they make decisions about proposed changes to the constitution by the Australian Government which will go to a referendum.

This was in the spirit of the covenant relationship the church established with its Indigenous people in 1985, said Rev Tim Matton-Johnson, Deputy Chair of the UAICC, and would progress the covenant in positive ways.

"When it comes to important decisions like this for First Peoples, we need to trust the people for whom this is a heart issue."

Holly Wright (Riverina Presbytery, NSW/ACT) said Rev Shayne Blackman, UAICC Administrator, had assured an earlier Assembly session that it did not see this as the church giving the UAICC a "blank cheque".

Mr Blackman said that the UAICC was a council of the church and would make no decision regarding the referendum question wording without consulting the Assembly Standing Committee.

Elenie Poulos, UnitingJustice Australia National Director, had also previously told the meeting that there was a need to raise awareness of the referendum and work to ensure the final wording was acceptable to Australia's First Peoples.

On the final day of business at the 13th Assembly, members expressed a clear intent to continue to grow the covenanting relationship with the UAICC.

The 12th Assembly approved the revised preamble to the Uniting Church in Australia's constitution to recognise Aboriginal and Torres Strait Islander people as the First Peoples.

Three years on, the 13th Assembly agreed to establish a working party to evaluate progress in the covenanting relationship.

In moving the proposal, Denise Chapman said it is important that the covenanting relationship is deeper than just words on paper.

"This agreement needs to have an impact on the actions of the councils of the church to implement the covenant and build partnering relationships with the UAICC in its ministry and mission among Aboriginal and Torres Strait Islander people who are striving for equal outcomes with non-Aboriginal Australians,'' she said.

"There is a wealth of evidence that Aboriginal people in Australia are among the poorest and most marginalised people and governments have committed themselves to closing the poverty, health and education gaps,'' she said.

"The Uniting Church has also committed itself to closing these gaps."

Dean Whitaker, who seconded the proposal, said the way covenanting happened between the two bodies was not replicated by any other mainstream church in Australia, and of that he was particularly proud.

The Assembly also passed a resolution of support for Indigenous people (proposal 63).

Members resolved to work towards 16 actions, many to do with calling the Australian Government to action on Stronger Futures legislative "regime" and ensuring that the Uniting Church will stand with the UAICC in the name of justice and to support Indigenous leaders.