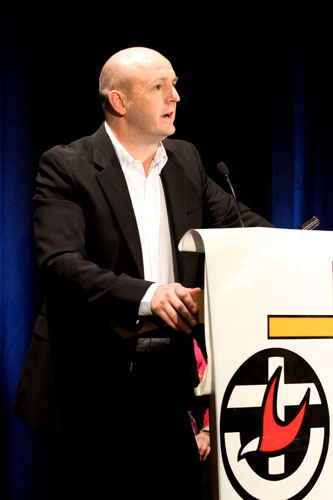 ON the second last day of business at the 13th Assembly, members were treated to the eye-opening wit and humour of economist and Executive Director of The Australia Institute, Dr Richard Denniss.

Speaking at a preview of the new UnitingJustice Australia website, the co-author of Affluenza asked why, in a country as rich as Australia, we can afford to tackle so many problems – but not climate change.

He pondered why it was that Melbourne could subsidise a car race but could no longer afford to subsidise fresh fruit in public schools.

Why Sydney could afford to host the Olympics but not house the homeless?

"Why does our economy generate the outcomes that it does?

Why is poverty with us in times of affluence?

These are questions that my profession and the political class love to keep to themselves.

"We can't possibly imagine tackling something like climate change because we are busy actually causing that climate change with the world's biggest mining boom," he said.

He reminded those present that big global issues are solved every day but it was a matter of priorities.

"We have and we do identify new problems and we solve them with a particular enthusiasm.

"But let's be clear: in the last 20 years we have not found the will to address Indigenous disadvantage, we have not found the money to improve our public education system, we will not invest the money we need to into our aged-care system to prepare for an inevitable demographic time bomb, and we are told repeatedly that we cannot afford to tackle climate change.

Dr Denniss urged Assembly members not to leave issues of justice up to the world's economists.

"As high priests of finance we have nothing to contribute to questions of justice."

"These are fundamental questions of justice and equity … the last people in the country that you want thinking about these problems are me and my colleagues.

These are not questions for economists, yet economics is used again and again to explain the inexplicable."

He congratulated Assembly members for the small amount of media coverage of the Assembly Executive Director of The Australia Institute, Dr Richard Denniss, calls 13th Assembly members to insist on economic justice prayer vigil on the steps of South Australia's Parliament.

"It is very hard to get on mainstream TV talking about issues of Indigenous disadvantage," he said, "but gee it is easy every night to get 30 seconds about the Hang Seng and the Nikkei-Dow.

"I don't know anybody who doesn't have an economics degree who even knows what the Hang Seng is!

"Do you really think that the people who need to know are tuning in to the Channel 10 News to find out?

So what is it doing there on the news every night?

It is telling you that big important things, that greater minds than yours have puzzled over, are happening in the world.

So why should we listen to you?

"These are things for you to demand of your political leaders, but understand that my colleagues will be standing between you and them, running interference, talking about the Hang Seng, getting you to think about anything other than here we are, living in one of the richest countries in the world, telling ourselves we can't afford to tackle poverty.

"Congratulations for taking the time to stop and think about things that, frankly, people really don't want you to think about."