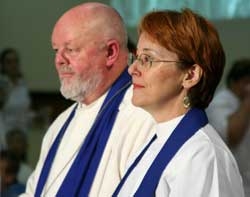 Moderator Rev Dr David Pitman opened his introduction to the Queensland Synod’s Draft Strategic Vision by quoting from The Daily Mail List Email Newsletter saying, "Vision without action is a daydream, action without vision is a nightmare."

"This Vision is not a blueprint. It’s more a description of what new initiatives in mission might look like as new work is established," he said.

Dr Pitman said that the Vision for Mission was about bringing three things into a dynamic relationship: the vision, the resources we need to ensure that initiatives will happen, and the flexibility to ensure that this work can develop unhindered by too many rules and regulation and too many committees getting in the way.

"If we submerge the vision under the weight of our structures, it will die"

Rev Deacon Tim Hodgson is involved the work of the Wesley Mission making connections with the homeless, prostitutes and most vulnerable people in the City of Brisbane.

"It is about breaking down barriers, building lasting relationships and introducing them to love of Christ," said Mr Hodgson.

"We aim to seep into the host culture like salt and light. To infiltrate and transform the community."

Beatriz Skippen who trained as a missionary and church planter in South America has commenced a work with Spanish speaking people in the Brisbane area.

She has discovered most people in those communities don’t connect with churches and is building connections with people from Spanish and Portuguese communities through soccer clubs.

An article in Journey, the Uniting Church in Queensland Newspaper, was the catalyst for a contact with a group of Spanish speaking people leading to 20 people joining a new Bible study.

Rev Stephen Templeton shared about a new church plant in the Lakes District area north of Brisbane which is meeting in the outdoor undercover area in a local school.

Rev Peter Armstrong told a story of responding to the street culture in the Redcliffe area using the resource called "Journeys".

He invited his neighbour to come around to watch the 8.30pm football match on a big screen and offered the option of coming at 7.00pm to see one of the stories in the "Journeys" DVD.

Mr Armstrong personally invited all his neighbours to come to both and at 7.00pm, five households came along and watched the video which led to them asking him to share the story of his faith journey.

Mr Macleod said, "this is church; but not as we know it".

"We hope that that two million might be the beginning of even more funds to support the new ventures that are bubbling up around the Synod," said Ms Tymms.

Ms Tymms reported that the Synod Leadership Team had also recognised the need for a person or team moving around the synod to help give legs to projects and encourage the Synod to act on the new possibilities being offered to the church.