Church urged to be truly inclusive of people with disabilities 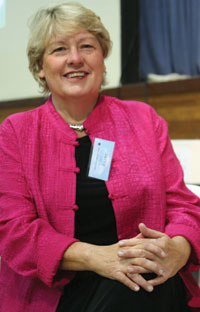 Presenting the Norman and Mary Millar Lecture as part of the 25th Synod of the Uniting Church in Queensland, Ms Elks urged the church to be more inclusive of people with disabilities.

A human service worker, special education teacher, a consultant and a minister Ms Elks told how she had felt confused and distressed at the way people with disabilities were treated in schools, institutions and society.

Her most important role, however, is that of being the mother of a 13-year-old daughter with Down syndrome. It is in this role that she sees the true pain resulting from the exclusion of people with disabilities in society and even in the church.

“The church can be one of the places where there is the most ignorance. It is easier to talk of what the scriptures want us to do than to actually do it,” she said. “It became very clear to me that God’s will for people with disabilities was very different from the ways of the world.”

Ms Elks spoke of the importance of looking beyond a disability to see people as human beings and said there are many ways society and the church excludes people with disabilities including segregation and social distancing, pity and assumptions on intellectual ability.

She told the story of a 45-year-old man going on church camp and spending the weekend doing activities designed for infants. “These experiences lead to a lot of wasting of people’s lifetime and gifts. It is also wounding to people who participate with these treatments. It is a degradation of awesome human beings.”

Ms Elks said she had see people being denied baptism because of intellectual disability.  “People think because this person can’t actually understand who God is then they can not have a relationship with him.

“If people are treated that way they may never have the opportunity to fulfil their God given purpose in life.”

Ms Elks spoke of the many and varied gifts of people with disabilities including prophecy, honesty and friendship.  “People with cognitive impairments are often able to cut through to things that are important in life.

“I need to hear from my church family that our daughter is valuable and important in the body of Christ. The church is to project God’s way to the world. How can we do this if we are merely a mirror to the world’s ways?”

Click here to hear an MP3 of Rev Elks’ lecture.

Click here for the full text of Rev Elks’ lecture.