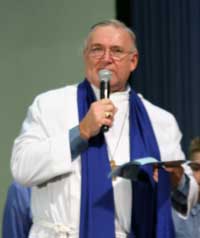 Retiring moderator Rev Allan Kuchler gave his farewell address on the first morning of the 25th meeting of the Queensland Synod and spoke of positives and negatives of in his term as Moderator.

He stated that not all experiences of his term as Moderator have been joyful.

“Often expectations and reality are poles apart,” he said.

“But nothing will ever take away those very happy memories.”

Presbytery minister Mary Burnett Rev David Fanning named Rev Kuchler the “orange and blue carded moderator” out of respect for his unbiased ways in dealing with issues within the church.

The cards are used as a way of voting for or against an issue.

“He did not tell you his own views on issues, he truly moderated. He has not taken sides and has given all people the opportunity to express their point of view.”

“The door to the Moderator’s room was always open, but not only an open door, he has come to visit us.”

“Although presbytery would have liked to have kept Alan as our Chair, we recognised he had God given gifts to assist the synod. Today the synod thanks you for the depth of pastoral care and concern you have shown through your ministry,” she said.

Respect and thanks were also given to Laurie Kuchler, the retiring Moderator’s wife, for her support both physical and emotional throughout his term.

A musical tribute to the Moderator written by Stephen Peake (to the tune of Alex Lloyd’s ‘Amazing’) concluded proceedings.

Click here to read the lyrics of the song.