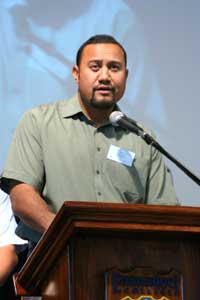 As he welcomes a large group of multicultural congregation visitors, the Moderator Rev Dr David Pitman reminded the Synod that in 1985 the Uniting Church made a commitment to be a multi-cultural church.

"We have in recent months discussed ways in which our multicultural and indigenous people can participate in the councils of our church and in the meeting of the Synod," said Dr Pitman.

"It is in that spirit of partnership and respect that we begin this process which reflects the desires and expectations of the leaders of the multicultural communities."

Mr Senituli introduced a number of proposals by reading from 2 Timothy 4:1-5 and offering a rebuke of Resolution 84.

"Our encouragement to you, our fellow brothers and sisters in Christ (is) to stand firm on the doctrines and teachings of the one holy catholic and apostolic church," said Mr Senituli.

Revd Hedley Fihaki quoted from the constitution of the Methodist Church of Tonga, "When a sexual relationship is not of its natural state and therefore not Christian, whether that be committed between a man and a man or between a woman and a woman, such a person shall not be accepted as catechist of preacher or and ordained minister or an employee of the church."

Mr Senituli said that, "The assembly has made this change which is vital to the continuing life of the UCA, without the concurrence of its members represented in Congregations, Presbyteries and Synods as provided in the Basis of Union."

"The change has been foisted on the church by a minority group who has seized control of the avenues of information and decision making in the church," he said.

"By endorsing Resolution 84 the Uniting Church has accepted the world view of our western culture, post modernity, not the biblical view,” said Mr Fihaki.

Mr Fihaki said the Uniting Church in Australia had watered down its doctrines and theology because of fear and pressure from society to be an all inclusive church.

Mr Senituli claimed that the church becomes mono-cultural and imperialist when it rejects the correction and rebuke from brothers and sisters in different cultures.

Mr Senituli and Mr Fihaki requested that the Synod ask the Assembly to adopt the process use by the Queensland Synod for listening to multicultural and indigenous voices of the church on the matter of homosexuality in leadership.

They also moved a resolution asking the Assembly to adopt a statement calling people to live in faithful heterosexual marriage, rejecting homosexual practice and requesting the church not to normalize such practices.

The Synod spent time in small groups in conversation with members of multicultural congregations. Because of cultural sensitivities the Synod met in same gender groups with men sitting on one side of the room in table groups and women on the other.

After considerable discussion the Synod resolved to determine its mind on the proposal by means of a secret ballot.

The results of the secret vote were declared on Sunday morning with the proposals being passed 181 in favour to 114 against.

A detailed response to this article by Rob Bos can be accessed at http://www.journeyonline.com.au/showArticle.php?categoryId=4&articleId=140

A detailed response by Rev John Woodley can be access at http://www.journeyonline.com.au/showArticle.php?categoryId=4