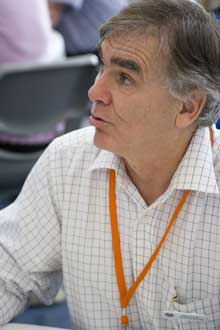 “We envisage one integrated institution (provisionally called Network for Christian Formation, NCF), with two arms, Trinity Theological College offering training which may lead to Bachelor’s and Postgraduate qualifications within the Australian Qualifications Framework for both ordained and lay ministry; and one provisionally called the Pilgrim Learning Community offering all other learning opportunities for lay and specified ministries, (including continuing education),” he said.

The Task Group was appointed following the 23rd Synod in 2002. After its report to the 24th Synod (2004), the Synod resolved to affirm the insights in the document Caught in the Slipstream as providing the basis for ongoing conversations about the nature and directions of theological education.

A key new initiative, the Learning Community will work in cooperation with the Youth and Children’s Ministry Unit (YACMU), the Mission Consultants, Vision for Mission Advocate Chaplaincy Commission and qualified people throughout the state.

Mr Johnson said the proposed Network for Christian Formation will not start new programs but rather link to other courses currently operating.

“Already across our church there are a number of people running courses.

“We have people with post graduate qualifications in theological education… they would be the people who do the teaching.”

“We are hoping this will create a place where young people can start to engage in their faith. We loose so many young people because there is not that process for them to grow in ministry.”

The Task Group’s proposals to the Synod included a recommendation for the appointment of a Director, a Coordinator of Formation and Continuing Education and a Leaning Designer to staff the new Learning Community.

The Groups report indicated that the Coordinator of Formation would oversee a process of formation which would be a task shared with Members of the church as equal partners.

The Group also proposed a renewed Ministerial Education Board made up of personnel able to offer policy and direction to the network to oversee the work of both the Learning Community and Trinity Theological College.

“Initially no option presented itself as fully attractive, although further exploration is being undertaken.”

Linkage with the Adelaide College of Divinity, plus Nungalinya College, in Darwin and Coolamon College has also been looked at in detail.

“Each of these would broaden our theological expertise and provide some new opportunities but not, given the distance, the day-to-day interaction on campus with people from a range of disciplines other than theology.

“We have sought the help of Kevin Davis, one time Director of the Darwin Institute of Technology and Deputy Vice-Chancellor of the Northern Territory University, and currently General Secretary of the Northern Synod, to investigate a university linkage further.

“While a preferred option is a State-wide network, with its administrative headquarters, classrooms and library situated within an ecumenical learning community on a university campus, this may take some time to achieve. This option, if achievable, would incorporate all levels of education, foster lively interchange with the university faculties, staff and students, offer theological students opportunities to do studies in other disciplines, and vice versa. We do not see the university as controlling the theological faculty or curriculum.”

Mr Johnson said the proposed changes to current theological education will not jeopardise ongoing partnerships with groups such as the Brisbane College of Theology.

“We would want to see that ongoing ecumenical relationship with BCT continue and grow stronger,” said Mr Johnson.

One member of the Synod meeting spoke of his concern about the future of Trinity Theological College in the new network.

“Trinity is part of the one whole. We would not see this cutting across what they are doing but rather working with them.”

HERE A SOUND RECORDING OF THE REPORT TO THE 26th SYNOD BY MEMBERS OF THE THEOLOGICAL EDUCATION TASK GROUP.