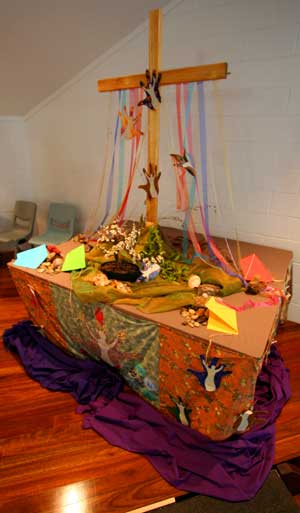 The 26th Synod’s theme was interpreted visually in a developing image on a Worship Focus Table placed in front of the Synod throughout the meeting.

The Worship Focus Table was put together by Caroline Holmes Jenni Farquhar, and Sharon Kirk.

Caroline Holmes explained to Journey that the table evolved over the five days of Synod and focused on Dare to Dream theme.

Om Saturday a ‘dream figure’ imposed on an outstretched hand formed the central image on a cloth draped around the sides of the table. A red dove and the golden tongues of flame touch the fingertips – the Holy Spirit is with us in this dreaming.

Coloured ribbons streamed down from the arms of the cross as the Synod affirmed, “Christ has died, Christ has risen, Christ will come again”.

The Worship Focus Table blossomed on Sunday morning with a flowering cherry plus greenery kindly donated from the Alex Park gardens. The rough stones were replaced by smaller stones.

The Synod was challenged on Monday by issues of inclusion. Smaller ‘dream figures’ in the shape of hands on a variety of fabrics were placed on and around the Worship Focus Table. These hands represented the cultural diversity of our Synod.

The final image on Tuesday morning reflected how God holds us in the folds of gentle wings. Feathers were dropped in front of the stage area and also passed from person to person around table groups. This action represented the laying down of attitudes that contribute to division and conflict, and picking up peace, healing, harmony, love, and holy truth.