Home > 27th Synod > Calls to review and revive the Covenant

Calls to review and revive the Covenant 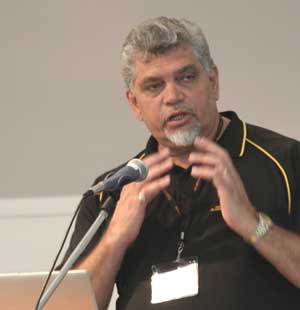 Calls to review and revive the Covenant
By Mardi Lumsden

Members of the 27th Queensland Synod were called to renew the Covenant between the greater Uniting Church and the Uniting Aboriginal and Islander Christian Congress (UAICC) on the first day of business.

Rev Dr Chris Budden addressed the Synod in session speaking on the theological foundation of the relationship between Indigenous and non-Indigenous Australians and the needs to renew the Covenant Agreement with the UAICC.

Dr Budden reminded the members of Synod that the relationship that exists between Indigenous and non-Indigenous members of The Uniting Church in Australia is based on the claim, “that we are created together in the image of God and the fact that we share faith in Jesus Christ as Saviour and Head of the Church”.

“The Covenant is about the shape of particular relationships,” said Dr Budden.
“It is about commitment and promise.”

“It is about ensuring all people are shown the same respect,” he said.

“I try to sit down with people and talk about things as they relate to our people,” he said.
“The Covenant is about working together to create a more equitable and just society in which everyone has the same opportunity.”

North Queensland Presbytery Chair Rev Bruce Cornish shared of his experiences living in the community of Aurukun in the early 1980s.

He said he leant many things but most importantly: to develop trusting relationships; to take time to make decisions and silence; the significance of family relationships; patience; and the importance of relationship.

“Out of relationship that covenant is born,” said Mr Cornish.

Mr Budden said the Uniting Church has taken important steps in the past, including naming the hurts caused by the Church’s role in the history of Australia.

“Now it is time to take further steps, to renew the Covenant and to organise our life in ways that are more just for the Congress and its members,” he said.

“To be truly church in this land we need to respect the place of Indigenous people in this community and in the church, and to build a relationship of trust and justice that allows the voice of all people to be heard,” said Mr Budden.

All speakers urged members of Synod to see the Covenant as an active relationship between Indigenous and non-Indigenous people.

Renewing the Covenant is an ongoing process within The Uniting Church in Australia.

Photo : Congress Chair Rev Shayne Blackman encourages the Synod in session to renew the Covenant with the UAICC. Photo by Osker Lau