Home > 27th Synod > General Secretary: It may not be over yet

General Secretary: It may not be over yet 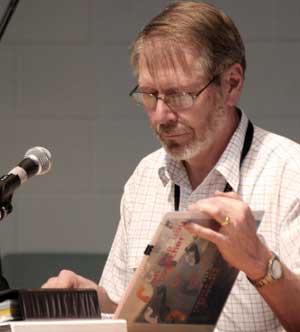 The General Secretary of the Queensland Synod of the Uniting Church Rev Douglas Jones gave a frank and detailed report on the financial strengths of the Synod in his report to the Synod.

Mr Jones said people who attended the meeting of the 26th synod in May 2007 left with a feeling that the Synod was in a strong financial position.

Mr Jones noted that over a ten year period increases in congregational giving had not kept pace with CPI increases and, as a percentage of total Mission and Service Fund, had been declining.

“As it transpires, the financial circumstances of the Synod have changed drastically since the 26th Synod.”

Mr Jones reported that the Uniting Church Investment Service (U.C.I.S.) will not be able to meet its commitment to give $12 million to the Mission and Service Fund over the 2007-2009 triennium.

After outlining in detail recent Synod appointments made and commitments entered into in the expectation of full funding in the light of the Synod’s Vision for Mission Statement and the Synod’s Intentional Missional Strategy, A Future with Heart and Soul, Mr Jones reported that the Synod had been faced with the challenge of taking $1.8 million out of the Mission and Service Fund expenditure.

“It became clear that the Intentional Missional Strategy, A Future with Heart and Soul, could not bear the weight of assigning relative priority to all the Key priorities that it contained.”

Mr Jones said this was, “Not surprising given that when they were framed up and adopted no one foresaw the current circumstances.”

The General Secretary’s report outlined the extensive consideration given by the Synod Leadership Team to the possibility of a change in the number of presbyteries in the Queensland Synod.

Such reductions have been recently undertaken by the Synods of Western Australia and South Australia the Synod of Victoria and Tasmania.

Mr Jones said the Synod Leadership Team (SLT) believed the differences in geography, history and demographics between Queensland and the other Synods and the timeframe needed to make such changes made it unviable to change the number of presbyteries in Queensland.

The alternative proposals adopted by the Council of Synod had involved cuts to the level of funding to presbyteries, the National Assembly, Financial and Property Services, Trinity Theological College, Pilgrim Learning Community and Synod Support Services.

Mr Jones said that it had been obvious that “business as usual” was not an option and that the uncertain external financial environment will mean another major draw down on reserves in 2009 even after the cuts made by the Council of Synod.

“In all likelihood, the Synod will need to start selling down assets in 2009 to cover expenditure.

“The wisdom of such a strategy must surely be questioned,” he said.

Mr Jones acknowledged the pain and disappointment involved in not being able to fund continuing positions for Mission Consultants, Justice and International Mission Consultant and Youth and Children’s Ministry staff.

Director of the Department for Financial and Property Services (FAPS) Mr Robert Packer said his department had determined not to replace staff who had left the service of the church and that FAPS staff had been reduced by nine positions.

The General Secretary’s report concluded with a statement of appreciation for the prayers of the people of God and support received during this difficult time.

Photo : General Secretary of the Queensland Synod of the Uniting Church Rev Douglas Jones reporting to the 27th Synod