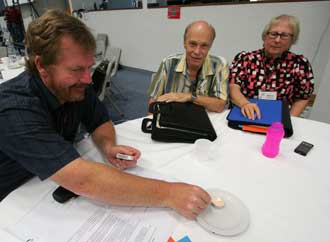 A service of lament was held on day four of the Queensland Synod meeting at Alexandra Park to recognise the pain caused by major budgets cuts within the Synod.

Rev David MacGregor led members of the Synod to light a candle during the service of lament and confession.

He said the service aimed to give expression to the pain of members of the Queensland Synod.

“We acknowledge all those who have been burdened by the unfolding financial situation during recent months,” said Mr MacGregor.

“We think of staff, committee members and their families who have carried the burden of the day.

“For decision makers, for those who are charged with implementing decisions, those who were informed their work in our Synod could no longer be funded.

“And those who will bear an extra workload where positions have been suspended, not filled.

“We recognise there has been much corporate and personal pain, relational stress and financial strain.”

Moderator Rev Bruce Johnson led members in a call and response prayer naming many of the hurts and feelings that have emerged in the light of the Synod’s financial crisis.

The members of Synod responded:

“As members of the 27th Synod, representatives of the Uniting Church in Queensland, we express the regret of the whole church for the consequences of the financial crisis which has adversely impacted upon the life, mission, and ministry of so many of our members.”

The Synod continues to discuss options to deal with the reduction of Synod funds.