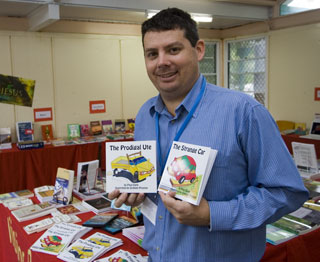 Six years after starting his journey of finding a way to teach his son about Christ, Mr Clark has published two children’s books The Prodigal Ute and The Strange Car, both off-shoots of his animated DVD Car Park Parables.

The parable of the prodigal son and the story of Zachaeus take on a new meaning as told by an old Model T to a church car park of different types of cars.

Mr Clark said the while in college he wanted to read Bible stories to his 18-month-old son.

“But he was more interested in playing with his toy cars,” he said. “The dilemma for me was how do I get cars into the Bible?”

Illustrated by Brisbane based Graham Preston the books were launched at the 28th Synod on Monday 24th may with North Queensland Presbytery minister Rev Bruce Cornish telling the crowd in the Vision Books shop how proud he was with what Mr Clark has been doing and how excited the Presbytery were about the books and the gospel message they contain.

Moderator Bruce Johnson said, “I’ve had a passion for children’s books for many years, even more so since my son came to me one day after reading a Christian children’s series at seven years old and told me he had given his life to Jesus.

“That is the power that presenting the gospel to people in their own language has.”

Publisher Rochelle Manners from Wombat Books said she loved the gospel message these books have.

“Just like Paul, I wanted to teach my young son the gospel message but didn’t know how," said Ms Manners.

“We love these stories and wanted other people to be able to read them to kids and have kids know Jesus.”

Car Park Parables, and its subsequent books, are proudly Australian with Australian cars and Australian Language, something Mr Clark is excited about.

“It’s hard to get publishers interested so I am really grateful to Wombat Books for taking this risk.

“These stories are unashamedly in Australian language and best of all not only published in Queensland but printed in South Australia.”