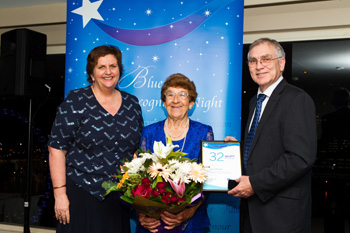 BLUE CARE acknowledged long-serving staff who have reached a career milestone of 20 years or more continuous service at the Blue Care Staff Recognition Night in Brisbane on 4 November.

Sixty Blue Care staff from across Queensland and northern New South Wales received special awards for their commitment and loyalty to the organisation at the event which was held at Rydges, South Bank.

Blue Care Acting Executive Director Robyn Batten said each individual had made an outstanding contribution to the
organisation.

“Staff Recognition Night is about recognising, not only the work they do, but the spirit and manner in which they contribute
to the health and wellbeing of frail, aged, and vulnerable Australians every day.”

Since the annual award ceremony began in 2008, 331 Blue Care employees have received the Staff Recognition Award for 20 years or more service.

Among the recipients wasregistered nurse Joan Donald,78, who retired from Blue Care Nowlanvil Aged Care Facility at Ipswich in June, after 32 years of service.

“What I enjoyed the most was making every resident feel at home in a place fi lled with kind and compassionate peoplewho ensure they are happy, comfortable and loved,” she said.

“I did what I did at Blue Care because of the example set by other dedicated people who went before me".