Governments to promote gender equality in the Pacific 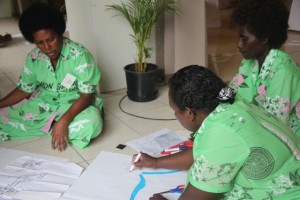 GENDER equality in the Pacific will be bolstered through a regional initiative announced yesterday by the Australian Prime Minister at the Pacific Islands Forum in the Cook Islands.

The $320 million Pacific Women Shaping Pacific Development initiative will support the efforts of Pacific countries to empower women to fully participate in political, economic and social life through a range of targeted interventions.

Women in the Pacific are currently severely underrepresented in the political sphere with women holding just five per cent of parliamentary seats.

A staggering proportion of women have been the victims of gender-based violence.

The President of the Uniting Church in Australia Rev Prof Andrew Dutney has welcomed the Australian Government initiative.

"I congratulate the Government for this important commitment to women in the Pacific."

"The Uniting Church in Australia has already benefitted greatly from the leadership of women and we are committed to achieving gender equality in all the councils of our church.

"Through our agency UnitingWorld we will work with our Pacific partner churches to help improve the opportunities for women's advancement."

The 10 year initiative will be undertaken in partnership with Pacific Island women and men, their communities and their governments as well as other development partners.

UnitingWorld recognises the vital role that churches across the Pacific will play in bringing about change.

"This announcement is consistent with what we believe and work for. Given the Church's central role in Pacific communities, we hope churches can get behind the initiative", says UnitingWorld National Director Rev Dr Kerry Enright.

"Pacific Church women are organised and effective in addressing these challenges and this will be a good and timely boost to them."

Pacific Church leaders have also expressed their support of the initiative.

"We strongly welcome the announcement of the Pacific Gender Equality initiative", says Rev Wilfred Kurepitu, Moderator of the United Church in Solomon Islands.

"The United Church in the Solomon Islands is committed to the church nationally and locally speaking up for the rights of women and helping equip them to live full, abundant lives."