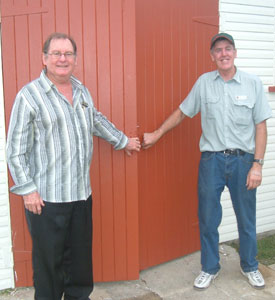 The men’s shed movement has taken off throughout Australia with many groups realising the importance of a space for men to talk abut life, health and faith, or just have a cuppa or build something.

The movement also helps older men maintain contact with others when there may be the tendency to keep to themselves.

Blue Care Project Worker Mischelle Surawski said the group came together after it was recognised there were a number of men Blue Care supported who were isolated or didn’t have an opportunity to connect with other men.

“Unlike women, men don’t usually come together just to chat or socialise – there is usually some other purpose involved, hence why our new men’s club congregates to investigate the nuts and bolts of different places and things,” she said.

Iona West Uniting Church in Mackay opened their Men’s Shed in September and minister Rev Euan McDonald said the program has already attracted a lot of interest, especially the breakfast run in conjunction with it.

Even the Mackay Regional Council recognised the importance the Men’s Shed has in the community, giving the group $5000 to equip the Shed.

There are also plenty of groups focussing on depression including OzHelp Queensland, a registered charity aimed at improving mental health and wellbeing for workers in the Queensland construction industry.

According to beyondblue, a national, independent, not-for-profit organisation addressing issues associated with depression, anxiety and related substance misuse disorders in Australia, over one million Australian adults live with depression each year and men account for 80 per cent of deaths by suicide.

While the Australian Bureau of Statistics (2008) results showed that one in eight men and one in five women will experience depression in their adult lifetime, beyondblue suggested that men often let symptoms go untreated for a long time.

According to their Depression in Men fact sheet, “Men tend to put off getting help for health problems, as they may think they are supposed to be tough, self-reliant, manage pain and take charge of situations.

“This can make it hard for men to acknowledge they have a health problem, especially a mental health problem. It is also very common for men, in particular, to manage their symptoms by using alcohol and other drugs which make the symptoms worse.”

Other major causes of depression include physical health problems, relationship or employment problems, social isolation, significant changes in living arrangements (e.g. separation or divorce), and the birth of a baby.