Home > Culture > After the Heavy Rain

After the Heavy Rain 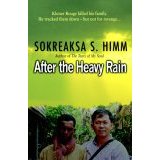 On the flyleaf of Richard Holloway’s “On Forgiveness” there is a quote from Jacques Derrida: “There is only forgiveness, if there is any, where there is the unforgivable”.

I was reminded of that quote as Sokreaksa describes what happened to him and his family, actions which were truly unforgivable.

Socreaksa writes of his early life in Cambodia, a country my grandson, Jeffrey, and I were privileged to visit this year responding to the kind invitation of Australian friends in Phnom Penh.

In the middle of this now booming city, with its multistorey development everywhere, its typical Asian city traffic and its flourishing restaurants and markets, we saw the sad memorials to Khmer Rouge interrogation and torture which ended only when a confession was recorded and the victim taken to a near-city “Killing Field”.

Socreaksa’s story is one of so many stories from the cities and the rural areas of people being killed, often by those of their own community, forced to do what they did, fearing their own death if they did not. It is a grim tale, a child’s personal experience.

In After the Heavy Rain he deals only briefly with his escape through Thailand to Canada and of his acceptance of the Christian faith.

Sokreaksa writes in this book of his 20 plus years of struggle with his hatred, anger and desire for revenge, all of which were at odds with what he was learning of Jesus’ way of forgiveness.

At length he learnt not only to forgive in his heart, but also to offer that forgiveness personally to his family’s killers.

It is an inspiring story by a man of great courage, and a challenging example of Christian forgiveness.

After the Heavy Rain was reviewed by Brian Lee