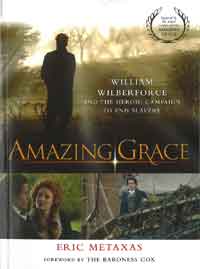 David Stratton, movie reviewer for The Australian and the ABC, gave two and a half stars to the movie Amazing Grace – the story of William Wilberforce and the heroic campaign to end slavery.

I’m still going to see the movie – because this book Amazing Grace: William Wilberforce and the heroic campaign to end slavery, spawned from the movie, paints an exhilarating picture of the life and times of Wilberforce in this, the 200th year since the Parliament of the United Kingdom abolished the slave trade.

It is an entertaining read, certainly less stodgy then the movie if Stratton’s opinion counts (and I often find Stratton is spot on).

Complete with stills from the movie, the book rattles along in a lilting, off-hand literary style which seems to work even if it is a little different.

The aim of the book I think is to paint a positive picture of a robust in-the-world-but-not-of-it type of faith.

It is intentional about being a feel good tale of a hero. In doing that, I don’t find the book pretentious and it seems to be an accurate enough account.

We get a very good caricature of Wilberforce, parliamentary colleagues and folk like John Newton who wrote Amazing Grace the hymn.

Amazing Grace: William Wilberforce and the heroic campaign to end slavery will inspire you to consider again what can be done if the fellowship of Christ turns its collective and personal trust to God – and it will open your eyes to yet another part of shameful history that is not rigour du jour on the school syllabus.

Reviewed by Michael Hewson, a member at The Hills Uniting Church Congregation