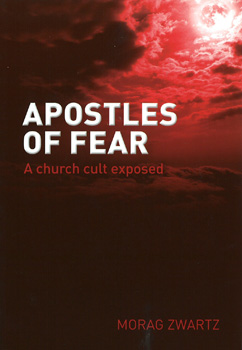 When I brought this book home my daughter grabbed it and said “Can I read it?”

Morag Swartz’s previous books were The New Christianity: Christ or Counterfeit and Fractured Families: the Story of a Melbourne Church Cult so she has a wealth of knowledge about the history of cults in Australia.

This book is well researched but emotive as she reveals the underside of the Christian Fellowships.

The first part of the book explores the history of the “Immanuel” (church) begun by Ray Jackson, an American missionary sent to Indonesia by the large and influential Pentecostal church, Bethel Temple.

Moving from America to New Zealand to Melbourne he embraced the “Latter Rain” influences, which according to Zwartz were either “a demonstration of occult powers and mass hysteria” or a ‘great move of God to restore and revive the church”.

It was a form of Christianity that finds its origins in the Montanist movement of the first century.

Mr Jackson, a charismatic personality, grew his church in Melbourne. From the beginning, as his band of devoted followers grew, there was continual financial and sexual abuse.

Upon the revelation of this abuse in 1988 the power centre of the church moved to Brisbane, where many from a Presbyterian church swelled the numbers.

This story forms the second part of the book.

The church has all the marks of a cult, isolating its members from non church relationships, demanding tithing and commitment, using heretical concepts which often degenerate into obscure and twisted teachings (for example a belief in an essential ‘mediator’ such as Vic Hall, leader of the BCF, between God and Vic’s followers, different stages of salvation, and emphasis on the “headship”).

I found this book frightening reading, because though it would be so easy to dismiss them as a bunch of “wackos” they nevertheless exercise profound influence and could have wrecked my own family at a time when my daughter was most vulnerable.

You may not agree with everything that Ms Zwartz says, but it will enlighten you as to the ways of cults.

All I can say is thank God for the Uniting Church!