Home > Culture > Behold the Man: A Therapist’s Meditations on the Passion of Jesus Christ

Behold the Man: A Therapist’s Meditations on the Passion of Jesus Christ 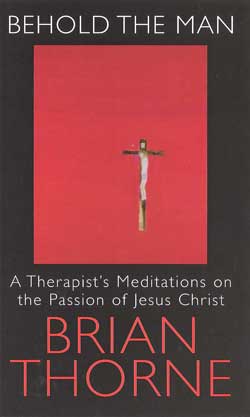 There have been numerous attempts to identify the “man” Jesus throughout the history of the Christian Church. Significant controversy has been generated by such work as Gibson’s The Passion of Christ.

While it is unlikely that Thorne’s small book of meditations will evoke great passions it will find a place in some local study groups. The origins of the text were in an Easter study series to which Thorne has added some further meditational material.

Thorne follows a fairly traditional pattern for study group material: a short chapter followed by set questions for discussion and some material to encourage meditation.

The chapters are easy to read and the content is clearly presented even though some readers may find the assumptions about the biblical characters a little stretched.

The author often strays from his field as a therapist to make theological comment from a conservative framework.

Behold the Man is underpinned by the experiences of Brian Thorne as a Rogerian therapist and the preface states that in its use readers will “begin to glimpse the implications of perceiving Jesus as the prototype of what human beings have it within them to become”.

Many readers may be aided in their study by the examples from Thorne’s therapeutic contacts and every reader will be well aware of the author’s constant reinforcement of his main theme – the encounter with Jesus that we can have in communicating with other people.

After some thirty years of counselling experience I admit to being rather frustrated by Thorne’s frequent reference to “entering the mind of Jesus”. This is, for me, a non-therapeutic concept and a slippery path for a therapist, or the reader, to follow.

Despite this reservation I believe Behold the Man is a useful addition to congregational libraries or for use in local small group study.