Home > Culture > Belief: Readings on the reason for faith

Belief: Readings on the reason for faith 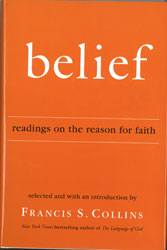 WITH THE rise of ‘new’ atheism and the often unhelpful debates about faith in God, this collection of writings is timely.

Belief is a collection of writings from thoughtful men and women throughout the ages (beginning with Plato) who, using their intellect and reason, explain the basis for their faith-based belief system.

It seeks to answer the fundamental question, “Is there a God?” as it examines the nature and possibilities of faith and belief, leaving readers to draw their own conclusions.

There are a number of faith perspectives represented, although the majority are written from a Christian perspective.

Some readings are fairly accessible, others fairly dense but all represent the writer’s own exploration of faith.

Some topics covered are: NT Wright on justice and spirituality; classic conceptions of faith from Plato, Augustine, Anselm, Aquinas, Locke and Pascal, Desmond Tutu and Elie Wiesel write on the problem of evil and suffering and John Polkinghorne on the relationship between faith and science.

I think the collection is poorer for the lack of an Islamic perspective and the absence of voices from Latin America and Indigenous people.

However, anyone really seeking to explore faith and reason would fi nd this book helpful.

It would also be valuable for a study group or reading group to work through.