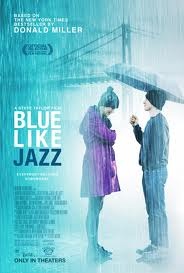 Based on the best-selling book of the same title and funded by the donations of thousands of fans, Blue Like Jazz is not a stereotypical Christian movie, and that's a big part of what makes it great.

Rated M, this semi-biographical movie is edgy because it is realistic.

The plot firmly grabs your attention, partially because most of it actually happened to co-writer Donald Miller, but mostly because, like real life, what happens next is unpredictable.

It's the story of Donald, a Texas Baptist boy who leaves home and faces a confronting new world as he enters college and has to figure out what his life and faith are all about.

Everything is different to how it was back home, and Donald's church upbringing seems to be incompatible with the pressure to fit in, be popular and make friends.

In this compelling journey, an often-confused Donald makes his fair share of mistakes as he struggles with working out his faith.

What does he really believe, and what is merely culture?

Amongst the chaos of the college experience, there are deep and moving interactions between characters.

A graveyard, a bicycle workshop and a fake confession booth provide the setting for some of the more emotional and pivotal moments of Donald's experience.

These types of characters and themes aren't often seen in Christian movies, but they are found in real life, which is part of what makes this a powerful movie.

This authenticity also helps make Blue Like Jazz the kind of movie you can watch with non-Christian friends without being embarrassed. It's not a cheesy movie where everyone who follows Jesus has a carefree life with no problems—it's a genuine look at some of the pains, challenges and decisions of life.

It isn't a Christian tract—it's a conversation starter.

As such, it can also be viewed by church groups, and makes for a great starting point for discussion.

Blue Like Jazz is especially relevant for later teens and young adults, but is also worthwhile for older folk.

Download the discussion guides and bible studies can be downloaded from- www.bluelikejazzthemovie.com.au/resources.html

Churches can screen the movie by visiting- www.movieschangepeople.com/flicks/movies.php?id=57