Home > Culture > Economics for Life: An economist reflects on the meaning of life, money and what really matters

Economics for Life: An economist reflects on the meaning of life, money and what really matters 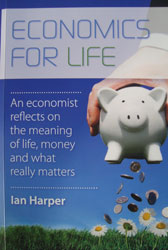 Reviewed by Terry Edwinsmith, a member of The Gap Uniting Church.

ECONOMICS FOR Life relates the journey of a hands-on academic economist who has contributed to Australia’s recent economic policy input to various Federal governments over the past 20 years.

He has done so from a Christian point of view.

It has been this marriage of Christianity with contemporary economic principles that has driven the author in his daily job and also in the writing of this book.

The chapters are a mix of economics written for both lay and professional readers alike interspersed with Ian’s testimony of his recent Christian journey.

Many readers would empathise with Mr Harper concerning his daily Christian witness in Australia’s secular society.

Mr Harper has an intimate understanding of Australia’s economic history up to and including the Global Financial Crisis and the public policy that governments have employed to distribute wealth to citizens and the laws enacted to enable equitable operation of the Australian financial system.

Economics for Life is easy to read and understand.

It provides valuable insight into contemporary Australian society as viewed by a Christian economic commentator.

The founder of modern economics, Adam Smith, a professor of moral philosophy at the University of Glasgow, wrote the economic text Wealth of Nations published in 1776.

Mr Harper’s book endeavours to bring moral judgment to the fore in his everyday economic deliberations in 2011.

It is a fascinating blend of seemingly two disparate subjects but one that should interest most readers interested in God and mammon.

I certainly drew inspiration from his insights both secular and spiritual.