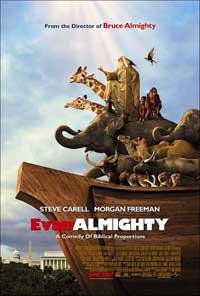 Evan Almighty brings Noah and his ark into 21st Century Washington DC, courtesy of the folk who made Bruce Almighty.

If it had been a British production, Adrian Plass might have written it. Perhaps it was Morgan Freeman playing God, but this reviewer heard echoes of “God is nice and he likes me”.

There were enough familiar faces among the support actors and cameos to make viewers feel at home.

Evan Almighty went close to the line but managed to skirt away from schmaltzy home-spun American homilies.

I was dreading the moment when Evan would spout some conservative middle class gospel, and all would be well in the suburbs.

Instead, the modern day Noah was left asking God hard questions to the very end.

There were moments when it felt as if Evan Almighty might slip into the usual ‘environment is sacred’ stuff served up by Disney of late.

It fell to God, manifested as a greasy spoon waiter with the nametag Al Mighty, to explain some facts of faith. He asks Evan’s confused and angry wife, Joan, about answers to prayer.

God talks about “opportunities”. If someone prays for courage does God just make her brave or does he give her opportunity to be courageous?

I won’t spoil the ending. Let me say you’ll get your $2 million worth.

However, right to the end you may be expecting a cop-out.

Joan gathers up so much of the debate in our own church when she asks Evan if perhaps God didn’t mean what he said, literally.

Evan is standing on the deck of a finished ark, loaded with animals, surrounded by network TV cameras and not a drop of rain.

Evan sums up many Christians’ sentiments with one memorable phrase.

It’s gentle but it worked for me.

My annoyance was that the film makers settled for a closing message that appeals to the idea of doing good instead of being faithful.

The word ‘ark’ makes a cute acronym – perhaps a little too cute.

Overall, I’d spend the money and take the family along again.

Reviewed by Phil Smith, a writer, speaker and broadcaster