Great Speeches of the 20th Century 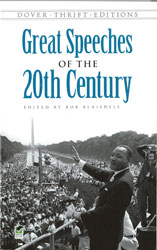 We have heard of Martin Luther King and his “I have a dream” speech, but what about Mary Church Terrell?
Mary delivered a speech in Washington DC in October 1906: “What It Means to Be Coloured in the Capital of the United States”.

In a similar vein Paul Robeson’s “For Freedom and Praise” in 1949 called for a change in conditions for the Negro people.

Great Speeches gathers speeches by some whose names are familiar to us and by some we’ve not heard of; speeches of politics and peace, of commemoration and tolerance, calls for freedom of speech and cries for independence.

We can read César Chávez who, after fasting for 25 days in 1968 to bring attention to the mistreatment of farm workers in California (their strike had lasted 31 months), asked “The Church to sacrifice with the people for social change, for justice and for love of brother (sic)”.

His speech has quotes that many would find useful such as, “We ask for the presence [of the church] beside us, as Christ among us”.

Ursula K Le Guin’s “Success is someone else’s failure … I do not wish you success, I want to talk to you about failure. Because you are human beings you are going to meet failure”, Ralph Nader’s “Every significant social movement … has sprung from active citizens fighting for their cause – women’s suffrage, worker’s rights, civil rights … citizens need to spend more time being citizens”, Harvey Milk on hope, Václav Havel’s “We still don’t know how to put morality ahead of politics, science and economics”, Aung San Suu Kyi’s “Genuine tolerance requires an active effort to try to understand the point of view of others”.

These voices along with the others in this little book are well worth mining.

This is a great little book for dipping into with pen/highlighter in hand.