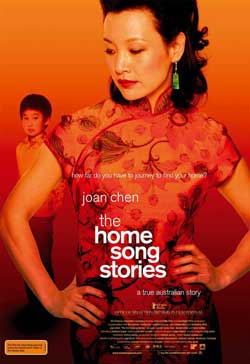 Home Song Stories is the true story of a glamorous Chinese singer, Rose, who takes her two children to Australia in the 1960s for a better life after falling for an Australian sailor.

Once in Australia, Rose drifts from man to man, dragging her children with her, while she struggles with being an exotic, dynamic, and mentally unstable woman in drab suburban Australia.

Told through the eyes of Rose’s young son Tom, the story is a journey of an immigrant family not only struggling to find their place in a white Australia, but also dealing with their mother’s depression and consequent suicide attempts.

Each character’s subtly expressed emotions reflect the silence about mental health and difference in the 1960s, that perhaps remains today.

While Tom (Joel Lok) and his sister May (Irene Chen) are dealing with very grown up situations, they still manage to show their innocence as children and dependence on their mother, despite her pitfalls.

We travel with Rose’s children (and long suffering husband Bill played by Steven Vidler) as they grieve the loss of the woman they had know and come to terms with the woman she has become.

For May, she learns what made her mother the way she is.

As he says, it isn’t necessarily the true story; it is how he remembers it.

And there are some things, a child never forgets.