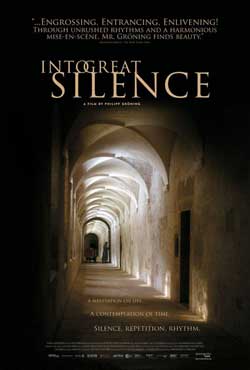 For anyone interested in prayer and spirituality, seeing the film Into Great Silence is a must.

Subtitled in German and English, this is like no other film you have ever seen: there is no plot, nor dialogue, and not much action.

Into Great Silence looks at life inside the Grande Chartreuse, the head monastery of the Carthusian Order in the French Alps.

The Carthusians are a 900 year old enclosed religious order, living in silence, apart from their three times daily community prayer.

While Carthusians don’t actually take a “vow of silence” the monks speak only when really necessary in order to foster a spirit of silence and create an atmosphere of serenity.

He had to accept rigorous conditions imposed by the order for permission to film for six months inside the monastery and has developed a beautiful film with stunning scenery.

Into Great Silence follows the seasons of the year as the monks go about their work of prayer leaving the lay brothers to do most of the practical work.

And yes, there is a soundtrack – the chanting will transport you.

Gröning made the film out of a conviction that the movie business is over-organised and over-technical.

“I wanted to get back to what I think is a real artist’s work, which is trying to search for some kind of truth and convey that,” he told the Salvation Army’s Warcry magazine.

The film highlights the passage from 1 Kings 19, where Elijah encounters God in the “still, small voice” and the passage in the New Testament about leaving all for the sake of Christ.

At one point, in raising the question about the point of this life devoted solely to prayer in solitude, the response is, “That we may hear one word from God. That He is”.

The film is 2 hours and 45 minutes long, but I was not bored for a minute.

Watching Into Great Silence is a bit like a mini-retreat.