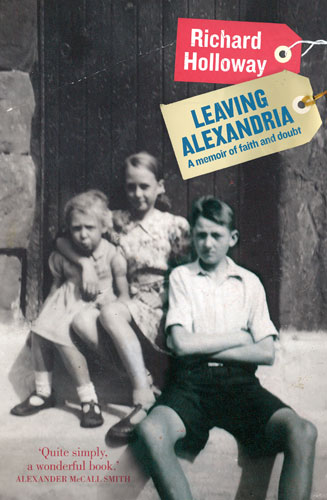 In some respects this is a sad book, as typified by the author quoting a number of times, "For Demas hath forsaken me, having loved this present world" (2 Timothy 4:10).

Yet the autobiography of Richard Holloway (formerly Bishop of Edinburgh and Primate of the Anglican Church in Scotland) is a penetrating and honest insight into one person's journey in the Christian faith. And it seeks to deal with the challenges to institutional Christian faith over the past century or so and which are continuing, as seen through the eyes of one man.

This honesty extends to another aspect of his personality with which I can identify. In acknowledging the strongly self-analytical basis to his relationships and his dealing with events, he speaks with admiration and some envy of those good people (whether caring for people suffering from terminal HIV-AIDS, or even his own children) who innately and spontaneously express care and goodwill to others.

Holloway claims that this honesty and perhaps a tendency to publicly voice his thought as it has developed have got him into trouble, and led eventually to his resigning from his posts in the Anglican Church.

Has Christianity a future? Has God a future? One can follow how Holloway developed doubt as to whether these two entities even belong together.

And in the end it got too much for him. The indications are, however, that despite (and perhaps because of) the loss of his ecclesiastical status he will continue to have no less an impact on stimulating thought.

His writing, which he did not begin until nearing 40, has proved an inspiration to his readers for relating the worldview promulgated by Jesus the wandering Jewish sage of some 2000 years ago to the worldview of this very different era of our twenty-first century.

Its appeal would be particularly strong for those like him (and me) who seek to know what constitutes Christianity and what constitutes morality in this day and age – and to what extent there can be a link between them.

For Richard Holloway it is an ongoing journey.

I am sure he has a lot to say to those Uniting Church people interested in the challenges to the church of twenty-first century ideas and struggles.

I would recommend Leaving Alexandria as a means of sharing the history of that journey with him.