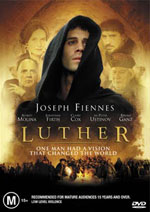 Luther
Directed by Eric Till
DVD available for rental not yet for sale.

First released to the big screen in 2003 the story of Martin Luther, 16th century German monk turned church reformer, maintains much of its impact on DVD.

The story begins with Luther’s dramatic survival in a terrifying storm and tells the story of his discovery of God’s grace, his excommunication and the resulting dramatic and violent social upheaval.

Joseph Fiennes does a fine job of the title role but it is Peter Ustinov’s superb portrayal of Prince Friedrich which steals the show.

Luther wasn’t a big box office success but it offers some excellent insights into the man, his context and his story. As modern movies go, it is fairly light on sexual content and profane language, but the violence is graphic enough to rate it as M.

A weakness of the film is trying to cover such a complex and detailed life in the space of two hours which results in a cursory treatment of a more profound story. While close to the historical accounts and with much of the dialogue true to the written records, the film only hints at Luther’s lifelong struggle with depression and completely ignores his notorious anti-Semitic attitude.

Despite its shortcomings Luther is a powerful film created on over 100 sets across 20 European locations and provides an entertaining history lesson about an historic figure whose work was the catalyst for the Protestant Reformation.