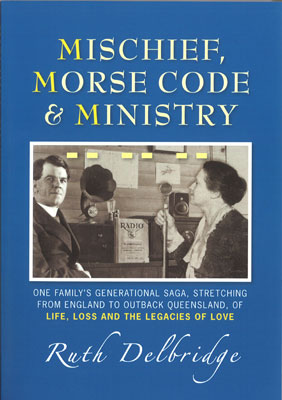 WHAT a wonderful book of memoir, imagination, history and strong Christian faith!

It's the story of Rev Reg Delbridge, his wife May, their family and ancestors.

His memoirs of life in Kent, adolescence, conversion and work as a morse code

telegraphist are extensive, personal and fascinating.

On his first leave back in England he married his sweetheart, May Hobbs.

After World War I service, his ministry took him to the Methodist churches in Emerald, North Rockhampton, Kingaroy, Childers, Paddington, Hamilton, Silkstone,

David Busch's review said, "It is told both in the winsome, eloquent prose of Reg himself in his private memoirs and an engaging narrative woven by his daughter-in-law Ruth, from the threads of meticulous and loving research.

Evocative and absorbing, candid and at times philosophic, it's a story of journeys geographic, emotional and spiritual, populated with characters, places and incidents

Reg's vivid descriptions of being a Methodist home missionary at Sarina, Charters Towers, Ingham and Oakey before World War I reveal his love of people and his willingness to adapt to challenging experiences.

He was one of the first ham radio operators in Queensland.

As well as communicating with people in many continents, he and May broadcast local Christian programs with a small group at Hamilton and Silkstone.

At Northgate, 60 years ago, in Reg's radio shack, my father, brothers and I watched as he spoke with people far away.