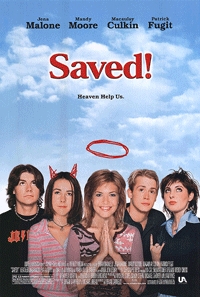 Central character Mary discovers her boyfriend is gay and, after a “vision" from Jesus, goes to bed with him to redeem his sexuality.

The rest of this film works through Mary’s resulting pregnancy with her senior year friends at an all-American Christian high school. Featuring Mandy Moore, Macaulay Culkin, Jena Malone and a host of teen movie stars, Saved is both a complex and superficial movie which expands the old Danish proverb, “Better to be a sinner than a hypocrite".

Saved satirizes the rigidity of intolerant ultra-fundamentalists rather than Christian faith but the targets are too easy, and director and writer Brian Dannelly doesn’t really give his stereotypical conservatives a chance as he champions the cause of spiritual hospitality.

There are moments of amusement and sometimes joy which run out of steam well before the somewhat contrived ending. Nevertheless it is a fun 90 minutes of entertainment; the comic barbs may be more that some can stand so, if you can’t laugh at yourself, don’t watch this DVD.

The DVD comes with the usual audio commentaries, deleted scenes and bloopers.