Home > Culture > Searching for the REAL JESUS: Jesus, The Dead Sea Scrolls and Other Religious Thoughts

Searching for the REAL JESUS: Jesus, The Dead Sea Scrolls and Other Religious Thoughts 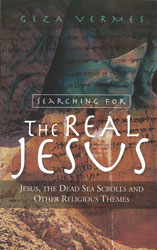 One of the most important “Jesus” scholars of the 20th century, Geza Vermes, it seems to me, is uniquely placed to produce such a work.

Born into a Hungarian Jewish family in 1924, he was baptised into the Roman Catholic Church at age seven, lost both his parents in the Holocaust, was a Roman Catholic priest for six years then in middle age found himself “back at my Jewish roots”.

He has been at the forefront of Jesus research, publishing his first book, Jesus the Jew in 1971.

Searching for the Real Jesus is a collection of 29 essays, lectures and newspaper articles in which he offers portraits of Jesus the Jew from a number of angles, although all are derived from a method of extraordinary simplicity: reading the New Testament closely and without prejudice.

At the core of Mr Vermes’ work is his search for fact and reality, thus uncovering the real Jesus of Nazareth, free of the distortion of both Christian and Jewish myth.

There are a number of excellent articles on aspects of Jesus such as The Age of Jesus, which identifies some of the influences on the life and times of Jesus of Nazareth, Jesus the Jew, Was Jesus Really Human, and The Changing Faces of Jesus which explores the different portraits of Jesus seen in the Gospels.

As well as bringing Jesus powerfully to life, this also throws up some rather overlooked details, such as that Simon Peter (the first Pope, traditionally) was married.

Part two of the book focuses on the Christmas and the Passion, part three on the Dead Sea Scrolls and part four on miscellaneous topics such as tax-collectors, Christian origins and the great Da Vinci Code distraction.

Unfortunately there is one disadvantage of the book being made up of a collection of lectures and articles and that is that it is somewhat repetitive, as Mr Vermes covers the same important points in more than one article.

Apart from this though, Searching for the Real Jesus is an excellent and accessible read for anyone wanting to learn more about Jesus.