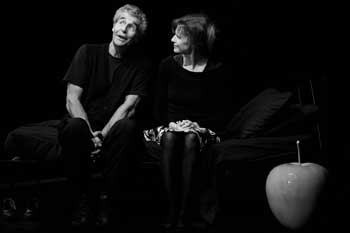 Lewis, an adult Christian convert, is best known for penning of the Chronicles of Narnia and Shadowlands weaves strands of the magical world he created in that series throughout it.

Shadowlands focuses on the relationships of Lewis, Gresham and her young son, as well as four fellow Oxford dons (including Lewis’ brother Warnie) he enjoyed getting together with and discussing literature, religion, women, philosophy and the troubles of the world.

A veteran cast and a beautifully written script helps this incarnation of Shadowlands immensely and it is easy to get transported into the story.

Christian Heim’s direction is an innovative adaptation of William Nicholson’s 1985 script with the introduction of live music, sculpture and mine.

The simple marimba and glockenspiel music and a beautiful light sculpture added some lovely moments and gave some extra space to take in the previous scene but I found the mime distracting.

Cirque du Soleil mime artist Ira Seidenstein certainly has a great skill but I found the story did not need more magic. His scenes however did help the movement of the cast on and off stage.

Caroline Beck (Mrs Gresham) and Warwick Comber (Mr Lewis) subtly show the movement from a nervous friendship to, ultimately tragic, love and 13-year-old Conor Leach (Douglas Grsham) does a wonderful job while on stage with some very experienced actors.

The final scene is uncomfortably harrowing, which I suspect is just how Mr Heim wanted it.

Thought-provoking, intimate, and beautifully acted Shadowlands is well worth catching.

The final performance is this Saturday evening (7 August) at the Brisbane Powerhouse – Visy Theatre. Visit www.brisbanepowerhouse.org for more details.