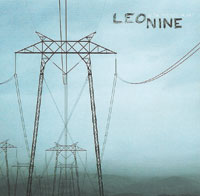 Originally known as Battered Fish, Leo Nine have quietly been working away at a new sound since their last full length release seven years ago.

Their self-titled EP release in 2001 gave fans a taste of what was in store and the result, Slow Steady Heart, proved worth the wait with the single, ‘Stay’, getting airplay on Triple J.

Slow Steady Heart heads Leo Nine in a new direction. While their well-known darker sounds are still present, they have taken more risks on this release (including experimenting with electronic elements) and the final product showcases their versatility.

The title track easily soars from depths to heights with thick vocals, layered guitars and a tight sound that is reflected throughout the album. The haunting Rhodes piano and static sounds on ‘Dragging My Head Through Mud’ lead to a methodical masterpiece with hints of the delicacy of Jeff Buckley.

Overall, the sound is positive and uplifting, but reading the lyrics proves there is more than meets the ear to Leo Nine.

Let’s hope we don’t have to wait another seven years to see what they do next.