The Cross Alone songs of unity 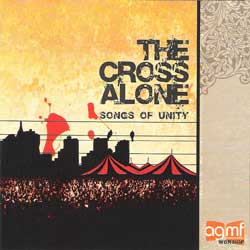 The Cross Alone – songs of unity is the compilation prepared for the Australian Gospel Music Festival 2007.

One in You is the work of Peter Pellicaan and well reflects the subtext of the album’s title: ‘songs of unity’. One in You was written in response to the ‘Forty Days of Unity’ Bible study involving a number of Toowoomba churches.

I found The Cross Alone an approachable alternative to the Hillsong style. While it’s possible to apply the Uniting Church doctrine of singing every chorus twice, these are not necessarily repetitive, clap-along songs. Mostly they take a measured tempo, allowing time to reflect on the themes of our faith.

Released at Easter, Shelton and producer Craig Ross invite congregations to look again at what the world considers foolishness: the cross of Christ. Drawing on Paul’s words in 1 Corinthians, the title track is perhaps a sophisticated version of the ‘scripture choruses’ that affirmed our faith in the 1980’s.

All the wisdom of this world…
Cannot contain, cannot explain the cross.
Foolishness to those who die
Who won’t accept Christ crucified,
The power of God to those who will believe.

The CD comes with a booklet of lyrics and a short note explaining the inspiration behind each song. Often those stories are about challenges the Christian community has faced in Toowoomba. Yet the themes are universal and essential, which is why I expect to hear a couple of these songs in churches around Australia.

Each track brings the listener back to God’s saving Grace.

All the best we have to give
Is not enough for us to live.
That’s why we thank you,
Thank you for the cross.

Jesus Christ has saved the day.
His bleeding hands have made the way.
We love you.
Thank you for the cross.

Review by Phil Smith a member of the Pine Rivers congregation