Home > Culture > The Feminine Spirit: Recapturing the Heart of Scripture

The Feminine Spirit: Recapturing the Heart of Scripture 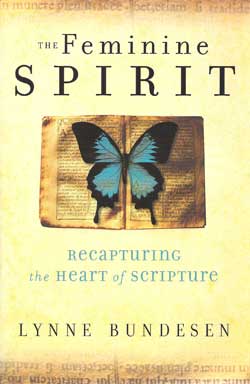 I can’t figure out who The Feminine Spirit: Recapturing the Heart of Scripture is written for.

It’s one in a series entitled the Woman’s Guide to the Bible but it is not one that is likely to be picked up by any church study group soon, and it’s certainly not for a book for female biblical scholars.

So I figure that it could be written for women who are interested in exploring Christianity, but are not too excited about an image of God that involves a really, really angry Dad. And to that end it does provide food for thought, but unfortunately it tastes a little bit too like diet lime jelly for my liking.

Bundesen starts The Feminine Spirit with what I can only describe as a brave and audacious approach.

She names the fact that every version of the Biblical text that is read by you, (unless you are an ancient Hebrew or Koine Greek scholar) is a translation. Fine so far, it’s the end of page one and I’m still with her.

But by page two it’s all beginning to get a bit worrying. She provides her own translation of the Hebrew term Ruah Elohim, (Genesis 1:1-2), which is usually translated as Spirit of God, or God’s Spirit. With no authoritative source for her claim as far as I could find, she argues that this phrase can be grammatically classified as a feminine plural form of noun. God, she argues, is described as a feminine Spirit.

Now I have only done seven weeks of Hebrew, but even that was enough for me to understand that although the words may originally have had a feminine form (like ship, or church do in English) that does not mean that you can classify the thing described as female. I also know that the plural ending of Elohim (im) is a masculine ending. I also know that no language scholar is likely to give her claim hearty endorsement.

So, it’s at the end of page two and she’s rattled me a bit.

Having established that the Creator is not a large man, Bundesen takes us through various texts to illustrate how the creative feminine spirit of God can be located throughout the Bible. For instance she asks – “What if Job is not a struggle between God and the devil over a man’s soul? What if the story of Job can be read as an account of how the female nature of God silences traditional theology and restores spiritual creation to our consciousness?”

One feminist approach to Biblical exploration is to name the experiences of women, and then to analyse the way that biblical texts have been used to shape that reality. This approach is designed to acknowledge the reality of people’s lives and to work out how the biblical text and that lived experience might be woven together. It’s an approach rather like a conversation, some bits we hear, others we reject, others are life changing.

I like the feminist approach because it acknowledges the context of the reader and the fluidity of interpretation. Such an approach would never, ever claim that Job was a book about a fight between God and the devil over a man’s soul. Anybody who has read Job would not be likely to claim that.

So it’s here she loses me.

It’s a nice try, but I’m not sure it’s going to do be particularly helpful to that woman who might have picked up the book to find a way of understanding Christianity. The Bible is a text that is rich with imagery and significance, masculine, feminine, gender neutral…the works. A better introduction to these images would be to lose the dodgy exegesis.

P.S. Bundesen does write easily, but the book starts to get a bit sketchy and ragged toward the end. I am not sure who edits the texts at Jossey Bass but they should be doing a better job than this.