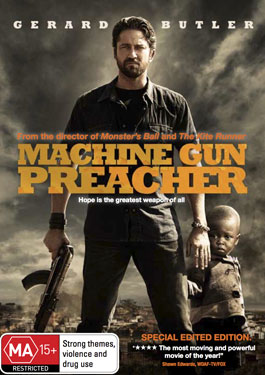 
The movie Machine Gun Preacher gives a quick overview of the background and the early days after coming to faith for Sam Childers.

The film focuses in on the orphanage he built and the struggle and toll to him personally, his family and the orphans he was helping in Sudan and Uganda.

This is not an easy film to watch.

It is raw, emotional, violent and unashamedly so.

Sam Childers (played by Scottish actor Gerard Butler) is a hard living, hard drinking, drug user who gives up his life of crime and violence after being baptised at the church that his mother, wife and daughter had been attending while he was in prison.

After a few setbacks, he gets a regular job working in construction, even starting his own business.

Childers then experiences the true nature of what was happening in Africa after going on a short term mission trip to help build an orphange in Uganda and visiting Sudan and being affected by the near genocide happening under the reign of Joseph Kony.

Throughout the film there is frequent coarse language, violence, alcohol and drug use, even death by drug overdose and from landmines and shootings.

Viewers will be shocked, moved and also at times left a little unsatisfied at the focuses and directions of the storyline.

Some areas are glossed over whilst others receive a more in-depth focus.

Having had the privilege of interviewing Sam Childers (through Vision Radio), I found Machine Gun Preacher lacking in truly capturing the essence of who he is and what he did and continues to do (something that Sam himself readily admits).

It does show his struggle to help the children of Sudan and the effect this had on him and his family, but it doesn't go into depth the spiritual struggle that Sam went through, it is more implied than explicit.

Overall, a very powerful film that is worth watching just to demonstrate the transformation that faith can and does have and the way God calls us into action for those less fortunate.