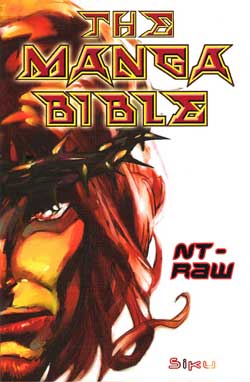 Christian fans of comic books might remember the picture Bibles from the 1980s, an ambitious attempt to illustrate the whole Bible in comic book form. I haven’t seen anything like it since – until now.

I love comics. Let’s just get that out of the way at the beginning. Anything I say from here on can be categorically dismissed if you don’t like comics on some level.

Of course, in my not so humble opinion, comics are a most universal art form, and anyone who can’t find a comic they like just hasn’t looked hard enough. Remember, you are talking about a genre that encompasses everything from Garfield to Peanuts to Sandman or ‘From Hell’.

Manga is a specific kind of comic that is very dynamic and fast moving, with an emphasis on conveying emotions and action. It’s quite stylised, with lots of flowing lines and sharp edges.

Personally, I really enjoyed the fusion of western and Japanese styles that make up the artwork in the Manga Bible. It had a very familiar feel for me. Perhaps reminiscent of Joe Madureira from the Uncanny X-Men or Hawk from www.applegeeks.com. It’s all black and white though – true manga style.

The artwork of The Manga Bible will not come as a huge shock to most who would be tempted to pick it up.

But I digress. What you really want to know is whether this little book is worth your $15. And I would have to say definitely maybe.

The artwork is really very good. It’s not a full artistic work on every page ala ‘300’, but it really flows brilliantly, is aesthetically pleasing, and conveys the point in with a great feel.

The only reason I have to not unreservedly recommend this book is the editing. Well, I mean they want to fit the New Testament into about 50 pages of comics. And while a picture is worth a thousand words, I’m a bit afraid they really needed a few more pages to do their task justice.

Perhaps it was my own (probably unrealistic) expectations – I was hoping for a deep meaty story, fleshing out some of the characters (with a bit of license, this is a comic after all!) and some real unique tellings of the story of Jesus and his friends.

Unfortunately, they have gone for an ‘edited highlights’ version of the whole thing.

There is the story of Jesus, told at a somewhat breathless pace, with some (very well thought out and executed) parables along the way.

Jesus is killed and resurrected in a matter of a few pages.

Then we get about half the book devoted to Paul’s letters. Some of Pauls stuff was pretty exciting (shipwrecks, snakes, other Christians), but they would have been better choosing one character and developing him more fully.

But perhaps I am not the target audience. This would be a great little book to have in the back of the church for the teenagers to read during the service 🙂 Or give to a comic loving friend who doesn’t have the time or commitment to slog through the whole text New Testament. They will burn through it in an hour or two.

Reading this won’t make you a theology professor but it touches on some of the more obscure stories that just make you want to open a Bible and see if that really happened, especially Revelation, which I think would make an amazing comic in its own right and gets just two pages at the end.

I did notice that they seem to be aiming for an Old Testament in the future.

I can’t wait for it – not only are the stories in the Old Testament more developed and action packed, but they seem to be going for an expanded version.

I only hope they give it the time and pages it deserves.

Reviewed by Frith Foottit, a PhD Candidate in the School of Engineering Systems at the Queensland University of Technology.

AN ADDIONAL RANT ABOUT BIBLE AND CULTURE

One of the things I wish were different about our society is its treatment of the Bible. Sure, it is the Christian holy book (whatever that means), but it is also a cracking good story. Well, parts of it anyway.

I have heard it said before (by a comic writer no less) that he is surprised that Christian mythology doesn’t feature more prominently in society.

Not so long ago, it was a shared background story that almost anyone would understand. What a great advantage for starting a story!

The Bible often gets right to the point and always has some reason for every story, but I think that taking a chapter or three and really fleshing out the scene and the characters would make for some spectacular stuff.

And for this I think comics are a great companion to the Bible. It’s got the stories and the moral message that make a great tale, and comics are distant enough from reality that no one would ever get confused into thinking they are reading anything but a fictionalized story based on some historic events.

The Picture Bible of the 80s had a crack at this, and I read it from cover to cover repeatedly.

But it had a similar failing to the Manga Bible – they treat scripture literally as a script. Which probably makes it easier to sell to fundamentalists, but makes the whole thing rather stilted and a little boring.

My favourite phrase for this failing is ‘wasted potential’ and that is the heaviest criticism I know when it comes to books and films.

A bad film based on horrid source material is understandable and maybe forgivable, but to take some truly great tale and reduce it to an automatic recital is a sin against the art itself.

A common sin – it takes a huge amount of courage to break out of the ‘let’s draw the words’ pattern and into ‘let’s create a story’.

But I think that this courage would be richly rewarded. Well, at least I will sing the praises of said writer/artist from the rooftops.