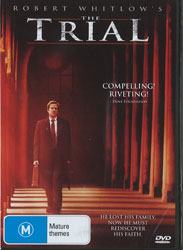 The Trial is based a novel by author Robert Whitlow and, as the back of the DVD says, “follows the story of ‘Mac’ McClain, an emotionally crippled attorney who’s lost his faith in God and himself.

That’s when Mac reluctantly decides to take on one last case: a young man facing the death penalty for first-degree murder.”

I have not read the book but my guess is that it is a little more thrilling than the movie.

While the DVD was entertaining-ish it failed to reach any great heights or to impress with the script, the cast or the production.

Parallel to the criminal case we also see aspects of Mac’s life as he seeks to come back from the pain and loss of his own family.

There are aspects of redemption and healing in the movie however, it feels like it is added almost as an add on to help market the film to a Christian audience and hope they get some people to buy it.

The film really only scratches at the service of some issues and when a theological question is asked it is answered with almost a pithy one line answer and then the scene moves on.

The plot is quite interesting, even if the script is not that well written, and I must admit that I did not exactly pick the ending.

I watched the DVD with my wife on our DVD night together and the movie was not as bad as many of the dodgy DVD’s that we have hired over the past couple of years.