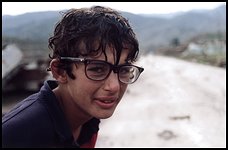 Set in a refugee camp on the Turkish/Iranian border, a growing community of Kurdish refugees are caught between Saddam Hussein’s genocide on one side, and Iran’s refusal to let them cross into their territory on the other. Within every human community hierarchies develop quickly, and here Satellite, a short-sighted 13-year-old orphaned boy, is the king of the castle.

A combination of charm, tyranny and courage has seen him amass an army of camp children to do his bidding – mainly by collecting landmines from the surrounding hills. He then sells them to the UN or on the local black market. A complex child, he is old for his years and heavily defended emotionally. He falls in love with Agrin (Latif) who arrives in the camp with a baby and her older brother Henkov (Hiresh Feysal Rahman). Henkov lost both his arms when he walked on a landmine. No children should ever be subject to the traumas these three have endured. Satellite dotes on Agrin, though, initially, she is too hurt to respond to him on any significant level.

With news of the USA’s invasion of Iraq to topple Saddam, Satellite upgrades the camp’s satellite dish. He becomes the most important person in town when he gets it to receive CNN. If only someone could understand English, they could find out what’s actually going on around them. With jet fighters flying overhead, the United Nations moving into the camp, and Satellite’s empire crumbling around him, he gets Agrin to share her terrible secret. The truth is unbearable.

Made for US$30,000 Turtles Can Fly proves that a compelling story and believable acting delivers much more satisfying cinema then expensive special effects. This film explores some tough realities: the Iraq invasion from the perspective of Kurdish refugees, having children live off landmine sales, seeing a 13 year old tyrant-in-the-making wanting sex from his girlfriend, watching the suffering of landmine victims and hearing of rape and torture.

To all this, writer-director Bahman Ghobadi weaves delicious humour and mystical elements into the narrative. These are not just their to relieve us from could have been an understandably and unbearably bleak tale, but they also indicate the ways in which human beings cope in dreadful circumstances.

Turtles Can Fly won the Catholic SIGNIS award at this year’s Hong Kong International Film Festival. It is a gentle window into a world we know so little about, and yet one to which we are intimately linked, whether we like it or not. In surprising ways, this film challenges our thinking in regard to our countries attitudes and policies toward the Iraq war, refugees and who receives our compassion.