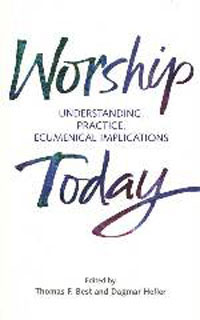 Worship Today: Understanding, Practice, Ecumenical Implications is an important book for the church in Australia and across the world. It is Faith and Order Paper No. 194 from the World Council of Churches.

Its first value lies in how widely representative it is of the Christian family worldwide. Part I contains articles about the worship of God by writers from 21 different Christian traditions, East and West, four articles from specific national contexts, two articles relating to cross-traditional movements (Yoido Full Gospel Church, Korea and the feminist perspective), and two from religious communities of Reformed origin.

The traditions include several streams of Eastern and Oriental Orthodoxy, the Roman Catholic Church and the Old Catholic Church (that part of the Roman Church which did not accept papal infallibility in 1870), post-Reformation churches with a national base (e.g. the Anglican Church, Lutheran traditions and the Church of Scotland), churches emerging from the more radical Reformation (e.g. Baptist, Mennonite, Brethren), and later traditions to emerge such as the Quaker, Methodist, Pentecostal, Salvation Army and Adventist traditions. The Church of South India article represents the unions of churches in the twentieth century. Even while omissions from the list may be obvious, the contributors come from a very broad cross-section of Christianity.

Part II contains two articles. One is from Dagmar Heller tracing the history of “ecumenical” worship, making a distinction from the “confessional” worship of a particular tradition, as representatives of a growing number of churches have met to pray and discuss the Christian faith together since the 1920’s. The second, by Paul Meyendorff, is from an Orthodox perspective. Finally, for Part III, five scholars from different traditions were given the preceding papers to read and then to write overviews and to provide analysis. Amongst these is Robert Gribben, head of the Department of Practical Theology, united Faculty of Theology, Melbourne. The others are Ruth C. Duck (Garrett Seminary, USA), Paul Meyendorff (Orthodox Church in America), Jim Puglisi, SA (Roman Catholic, based in Rome), and Paul Sheppy (Baptist, England).

A review cannot canvass the range of thinking and analysis in such a book. The commentators seek to find what is common in all the traditions, e.g. the central place given to the worship of God by all Christians. They examine the ways that there has been a sharing of approaches to worship and certain degrees of convergence which have emerged, e.g. as several churches have worked with the Baptism, Eucharist and Ministry (BEM) document for some decades now. There is recognition that there are continuing difficulties for Christians to participate fully in the worship of other churches, the eucharist or Lord’s supper remaining perhaps the major stumbling block. Attention is given to the hesitations of the Orthodox churches and the theological bases for these. Some consider questions of enculturation. Disappointments and future hopes are voiced.

This book is valuable for those who would like to enlarge their understanding of the Christian churches world-wide and their approaches to worship. It should find a place on the shelves of theological students and all involved in inter-church councils and meetings. For those who are well read in the field, it is likely to add new perspectives, both from churches often not represented in such discussions and from the commentators whose distinctive personal perspectives provide deeply thought and felt views well worth pondering.

Does it lead to further practical developments towards Christian unity? It does not propose precise steps for the churches to take, but its force may well be in the wider understanding it offers to its readers and the way that this becomes reflected in local gatherings of Christian people for common prayer and the tasks of mission, doing together what can be done together. It can speak to all by indicating that there is never simply one right way for Christians to worship God, made known in Christ, in the power of the Holy Spirit.