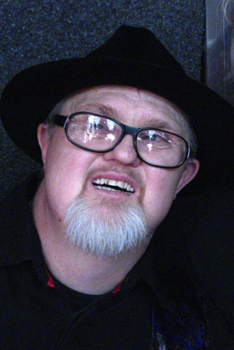 FOR NEARLY 30 years Peter Rowe could communicate only on a very restricted level because his speech is severely affected by Down syndrome.

All that time, his family and those who knew him believed he had very little understanding and comprehension.

But Mr Rowe’s life changed dramatically in 1994 when he was introduced to Facilitated Communication, a strategy which
may enable people with severe communication impairment to point to objects, pictures, symbols, words and letters to
communicate.

Since that monumental day, Mr Rowe has become a published writer, poet, artist and musician.

Mr Rowe is an entrant in this year’s Art From The Margins, a project of Wesley Mission Brisbane and part of Brisbane Festival.

“I cried when it was discovered that I could communicate and understand,” he said.

“It was the most amazing thing when Jane presented this communication board to me and I knew instinctively how to write
what I couldn’t say.

“I hated not being able to speak, to let people know that I understood everything that was happening and being said.

“Nobody had any idea and they just treated me like an idiot.”

Mr Rowe originally began art therapy to assist in working through the emotional scars of abuse at a care facility.

“The abuse I suffered at the care facility hurts me every day of my life.

“It keeps me awake at night because I feel none of the people there were given justice in the court system.

“So many went through this but very few got help.

I have probably been the luckiest of the lot because I have mum and dad who have devoted the last years of their life to making me safe.

“My recovery started with art therapy.

I did very explicit paintings and people realised that I was suffering. ”

In 2010 Mr Rowe won the Fulton Trotter Award, a major award in Art From The Margins.

“It just blew me away because I had never expected to be recognised in that manner,” he said.

“I believe my job is to let people know that people with disabilities can communicate and contribute to society.

“Then may be we will be valued as people, not just objects to be pitied.”

Art From The Margins entries close on 11 June. For more information visit wmb.org.au