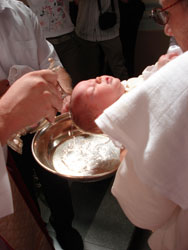 IN the service of Congregational Reaffirmation of Baptism, the members of the congregation are invited to trace the sign of
the cross on each other and to declare as they do so: “You belong to Christ”.

It is a powerful moment in which we are reminded of the identity we received at our baptism.

If we allow the sign and the words to tap into their deepest meaning, the power of the moment lies in its subversive intent.

Yet the subversive power of this moment has itself been undermined by the centuries of domestication and sentimentality
under which the sign of the cross has been buried.

Peel back that domestication and sentimentality and what do we have?

A sign of one of the most violent forms of state execution practised in the ancient world.

The modern parallel would be for us to mark each other – and our infants – with an image of a hangman’s noose or an electric chair.

It would be so much easier if we just said, “You belong to Christ”.

But the physical remembrance of the cross reminds us of just who this Christ is to whom we belong.

The only Jesus Christ to whom the sign of the cross entitles us to belong is the Jesus who persistently challenged
commonsense ways of belonging.

And this persistence helped to get him killed.

The people of his home town thought he belonged to them, but he walked right through the midst of them and went on his
way.

Some of Jesus’ Jewish contemporaries thought that God belonged to Israel, but again and again Jesus insisted that everyone belonged to God.

Even the disciples thought that Jesus belonged to them.

When they tried to isolate him from children, or sick or hungry people, he would demonstrate to the disciples to whom he
belonged.

Uniting Church theologian Rev Dr Garry Deverell recently suggested that to belong to Jesus is to be “torn away from our
natural roles in favour of a way of life which … calls into question the most common paths by which we journey through life”.

Perhaps every service of baptism or reaffirmation of baptism should become an occasion for such questioning.

As well as the reminder that we belong to Christ, perhaps we should challenge one another by asking, “What uncommon paths are you following?”

Imagine if we warned parents at the baptism of infants that by marking their child with the cross they are deliberately exposing their child to a call to an uncommon life.

Not a call to success but to simplicity, not to career but to caring, not to wealth but to poverty.

Perhaps baptism really ought to come with official warnings.

The call to belong to Christ has heavy demands, but it also announces a liberation.

Despite widespread anxiety about the future of the church, we are privileged to live at a time when the church has slowly but surely been weaning itself from the culture of Christendom and its lure of success, influence and status.

Perhaps more so than our forebears we are able to learn what it means to belong to Christ when there is nothing or no one else to belong to.

Marked with the cross, we can become an uncommon people living out the same hope in God which enabled Jesus to let go of those natural ways of belonging.