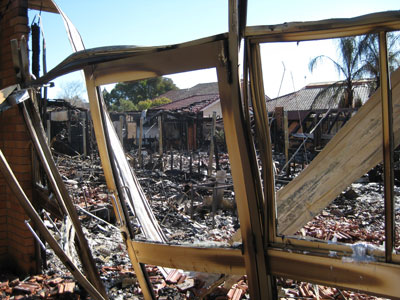 STAFF AND students of Scots PGC College in Warwick have been praised for their quick response to an early morning fire that destroyed one of the junior boys’ boarding houses in June.

The alarm was raised just before 3am on Saturday 13 June when one 14-year-old boy saw flames next to the bed of his roommate.

He woke his roommate up and together they woke the rest of the dormitory and sounded the fire alarm.

A deaf student was led to safety by a classmate and they waited in near freezing temperatures for a quick response from the local fire department.

A staff member organised shoes and clothes for the boys who left everything to escape the inferno.

College principal Michael Harding said if it were not for the quick thinking of staff and students the result could have been much worse.

“I can’t praise the boys enough for their quick thinking and leadership,” he told The Sunday Mail.

“The quick thinking of the students and their actions in the initial stages of the fire averted what could have been a tragedy,” he told The Chronicle.  “They regularly practise fire drills and it certainly paid off. The children knew what to do.

“It was extremely lucky that nobody was hurt.”

Principal Mr Harding said the College’s system of alerting parents of events via text message meant that within an hour all parents were contacted and told that their sons were safe.

Moderator Bruce Johnson visited the College one day after the blaze to meet with Mr Harding and members of staff and the College Council.

“I was shocked at the extent of the destruction and greatly relieved to know that all students and staff escaped from the building unharmed,” said Mr Johnson.

“It is a tribute to the local Fire Service that, given the obvious intensity of the fire, it was contained and that other buildings close by were not seriously damaged.

“I was impressed by the way the staff, College Council and students were coping.”

Students spoke with counsellors the morning after the fire and parents have been told to be alert to their children coming to terms with the destruction of all their worldly possessions including computers, clothes, photos and much more.

The destroyed dormitory is one of the newest at the College.

The affected students started their winter holidays a little early, but the College has assured parents there is enough space to accommodate the boys next semester.

The Insurance Program for the College, underwritten by Ansvar Insurance, does not specifically include cover for personal property of boarders. However, Ansvar has given considerable thought to how to best help parents who have sustained losses as a result of the fire.

Although Ansvar has no legal responsibility to do so, it has generously made allowance for some financial assistance to be provided to the families of students for items lost in the fire.

Photo : What remains of the junior boys’ boarding house at Scots PGC College after the June fire. Photo by Bruce Johnson