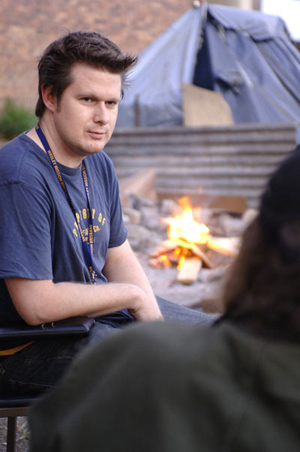 There are almost 80 ordained deacons serving in the Uniting Church across Australia but most congregation members have never met a deacon and have no idea what they do.

St Stephen was the first recorded deacon in AD 34 but his daring preaching of Christ led him to become the first Christian martyr.

Another early deacon was St Laurence, known as the patron of the poor, who defied Emperor Valerian’s order to hand over the church treasures to him.

Instead St Laurence assembled the poor of the city, shared the church’s possessions among them and then presented them to the Emperor, saying, ‘These are the treasures of the church’. His punishment back in AD 276 was to be slowly roasted to death on a gridiron.

These days, Deacons who follow the servant tradition of these early saints are not so harshly treated. They are more likely to be ignored or unrecognised for the work they do in the church and community.

Rev Paul Walton, convenor of an extensive report on the diaconate presented to the 2003 UCA National Assembly, reported widespread ignorance about the ministry.

“The Diaconate was renewed in 1991 but more than a decade later people still did not understand what this ministry was about,” he said.

Rev Tim Hodgson, Deacon from Wesley Mission Brisbane, said that while Deacons preach and celebrate the sacraments regularly within their placement their ministry is focused on reaching out to people in the general community, especially the poor and oppressed.

“In the Uniting Church, Deacons are Ministers of Word, Sacrament and Service, who have a strong emphasis on service,” he said.

The range of ministries exercised by Deacons is extensive. Tanya Richards is a student Deacon at Trinity Theological College who runs a Band Ministry at Wesley Mission on a part-time basis. Every Saturday night Tanya sees hundreds of youth from the hardcore punk and gothic scene come into the Lion’s Den Café to listen to punk rock bands play.

Rev Ann Hewson is a Deacon serving as a church planter at Bray Park in Brisbane’s northern suburbs and leads a team developing a unique church approach.

“We are so conscious that we need to be where the pulse of the community is and engage at every opportunity,” said Ms Hewson. “We are an outward focused group and as a Deacon I find this exciting, challenging and invigorating.”

Also serving out on the edge is Deacon Intern Michelle Cook, who is currently working on Cape York Peninsula as a Frontier Services Patrol Minister.

“I am focused on connecting people from remote stations to other people on the Cape, while at the same time connecting Indigenous with non-Indigenous people,” said Michelle who travels around the Cape visiting remote townships and stations as well as ministering with the congregation of St Luke’s in Weipa.

In inner-city Brisbane Rev Tim Hodgson is the Minister with the homeless at Wesley Mission.

Rev Dianne Bos works as a counsellor at Lifeline Ipswich in the area of child protection where she is working on programs to respond to the needs of abused children.

“In such situations, I am just so aware that I work with some of the most traumatised and vulnerable people in our community, those children and adults who have not had the single most basic necessity in life – at least one person who has been able to act in a protective and loving way towards them,” said Dianne.

“To offer people the capacity and time to listen to them, to enter into the pain they feel, and to stand with them as they try to regain their lives is to participate in God’s healing and restoring work in the lives of others.”

Another specialist Deacon, Rev Jan Chalmers, trains Blue Care aged-care chaplains in a range of areas such as palliative care, spiritual care of people with dementia and Alzheimer’s, and the spiritual needs of the ageing.

“Statistics indicate that the number of people over 65 years of age will almost double by 2024 so equipping people for ministry with ageing and aged persons is critical for the Church and the wider community,” she said.

At a time when the church is struggling to build a bridge between itself and the community, Uniting Church Deacons are reaching out to the general community in many unique ways.

“Anyone who feels they have a call from God to minister to people in the community should call me for a chat.” said Mr Hodgson.