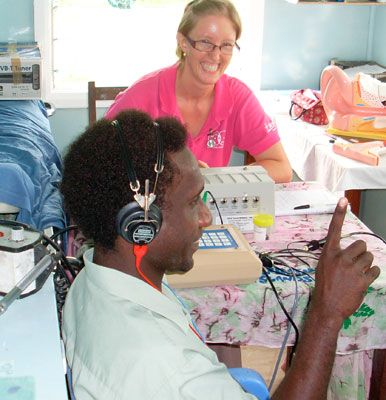 For the members of Enoggera’s Emmanuel Uniting Church, Brisbane, and the Noro congregation in the Solomon Islands an ongoing friendship has led to one intelligent young nursing student being given the gift of hearing.

Emmanuel Uniting Church Treasurer, Barry Jardine, said the congregation’s long tie with the Solomon Islands was strengthened when one of their congregation members moved to Munda to work at the Helena Goldie Hospital.

“Our minister, David Fender, and one of our congregation members, Annette Kaspar went with a team led by Bruce Mullan [UnitingWorld] to the Solomons in early 2010 and it was during this trip that the connection with Noro was commenced.

“It was also this trip which convinced Annette to give up her job as an audiologist in Brisbane and commit to the hospital in Munda for a three year term.”

Early on in her stay, as she established the only audiology department in the Solomons, Ms Kaspar met Stephen Heshibo, a profoundly deaf nursing student.

As a result of abuse Mr Heshibo had been losing his hearing since he was five.

The determined young man got himself through school and study (and learning four languages) by lip reading and guesswork to communicate.

“Annette became aware of Stephen’s profound deafness and began making enquiries through her contacts in Brisbane about the possibility of getting a fully funded cochlear implant,” said Mr Jardine.

In early December 2011, the 25-year-old became the first person in the Solomon Islands to have a cochlear implant.

“Annette is quite a resourceful young lady and clearly, with God’s help, moved quite a few mountains.

We really only got involved once Annette had managed to get a lot of the cochlear implant arrangements in place,” said Mr Jardine.

A prayer support group setup before Ms Kaspar left for the Solomons also became a fundraising committee once the team heard about Mr Heshibo.

The group ran a trivia night that raised over $4500 for airfares for Mr Heshibo.

“A huge amount of prayer went into all of these arrangements from when we .rst learnt about Stephen’s operation until he actually underwent the surgery and then as we waited for him to return home for the ‘switching on’ of his cochlear device which was successfully done amongst his family in his local village outside of Honiara.”

While in Australia Mr Heshibo was welcomed with open arms not only into the Emmanuel congregation but also into the home of Maureen Witheyman, a regular host of Solomon Island visitors.

“Because of his profound deafness it was difficult to communicate,” said Mr Jardine.

But in a service the week before his operation Mr Heshibo thanked the congregation for their support and expressed his faith in and praise for God in guiding him throughout his life.

“This had a very profound effect on the whole congregation!”

While Mr Heshibo and Ms Kaspar have both now returned to the Solomon Islands plans are afoot for Emmanuel congregation members to visit them and another guest of the congregation, Rev David Vakipide who, after his visit, went home and set up a Boys’Brigade.

The company has just celebrated its first anniversary and has over 70 boys involved.

“Plans are under way for David Fender, Maureen Witheyman and me to visit both Noro and Munda in late June/early July.”

“We sent a team of five people to Noro in February 2011 to assist David Vakipide in forming a Boys’ Brigade company.

This team are planning another trip in August to conduct leadership training … so that the Boys’ Brigade can spread and grow.

“We are quite certain tha twe have seen God’s hand in all of this as each of the many contacts has helped to build up the relationship and, at the same time, assisted in both congregations’ faith journey.

“It will be in the slow, relationship building involve-ment with our friends at Noro where we can listen for the guidance of the Holy Spirit as we seek to walk beside our Solomon Islands brothers and sisters in our journey of discipleship.”