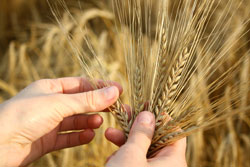 National Church Life Survey (NCLS) research has found that despite considerable differences between key issues facing churches in rural and urban environments, across measures of health and vitality there is little difference between rural church attendees and the national average.

Some 42 per cent of churches that took part in the 2006 NCLS were in rural settings (and more than half of those were Anglican or Uniting); a considerable proportion of Australian churches.

Key issues facing rural communities include drought, decline of jobs and decline of churches. Many rural churches are small in size, which presents a problem for funding ministry agents.

Almost half the rural churches surveyed were led by teams and leaders were likely to have responsibility for multiple congregations.

For some, these leadership structures were a choice, while for others it was the result of insufficient clergy to fill positions for which there were sufficient funds, let alone places where the finances were inadequate.

Rural church attendees were less likely to be university-educated or employed, which aligns with their older age profile.

Rural attendees were much less likely to have been be born in a non-English speaking country.

Across all measures of health and vitality — faith, worship, belonging, vision, leadership, innovation, service, faith-sharing and inclusion — there was little difference between the responses of rural attendees and the national average.

The inflow of newcomers was also similar for rural churches compared to the national average.

Other significant challenges across rural communities include the maintenance of community infrastructure and changes in rural agriculture as it adjusts to climate change realities and the pressures of global economics.

Understanding the unique contribution made by rural churches to their communities will be part of the upcoming 2011 National Church Life Survey.

“We specifically want to improve how we serve rural churches,” she said. “We will aim to adapt the survey experience for small rural and remote churches, including potential cost adjustments.”

For more information about the next survey visit www.2011ncls.org.au