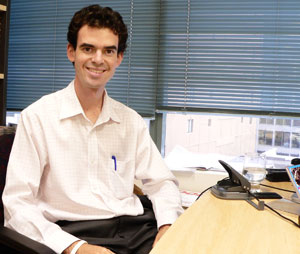 Brad Chapman is a self-professed high school dropout. The 22 year-old left school as a young entrepreneur to run his own mortgage broking company on the Gold Coast. Here is a young Christian who is exploring the world where religion meets politics.

As a teenager, Mr Chapman became interested in both Christianity and politics. Now he finds himself actively participating in both and seeing the potential to make a difference in his world.

At 21 years of age, he was selected as a member of the National Youth Roundtable (NYR) in 2004 and 2005.
The National Youth Roundtable is the Australian Government’s key mechanism for youth consultation. It brings together 30 young people from all over Australia and from different walks of life and gives them direct access to Government and an education in the way the Australian Government works.

“I have always been fascinated with ‘power’ and the mechanics of how things are ‘made to happen’ within society. Hence my interest in politics and the political process. I’m not affiliated with any particular political party or even ideology, I need the freedom to stand and argue on whichever side of the issue I believe is right,” he said.

Mr Chapman has recently begun working with the Anglican Board of Mission, as Projects Officer to the Evangelism and Church Support Program.

“This provides an amazing opportunity to work with Partners throughout Australia and the world and to participate in God’s mission. I hope to continue to learn and grow and in a sense to offer my life as a living sacrifice – however humble and insufficient.

"May tomorrow find me still trying to identify where God is at work and attempting to reflect some of the light of the author of life.”

However, how does his faith intersect with his political and social agendas?

“My faith in a loving and merciful God who calls God’s people to walk in the steps of Jesus forms the core of my identity and dictates who I am. As such, my faith is inseparable from those things that are important to me in a political/social context. That said, I don’t see faith itself as a political issue – in the sense that I don’t think political influence should be used to persuade or enforce adherence to any particular faith. I do however, feel that the manifestation of my faith demands that I be active in a political/social context.”

“As messed up as both church and politics can be at times, both remain legitimate avenues for influencing and changing society. While I don’t advocate working solely through politics or the institutional church; for good people to desert these areas would impoverish us all.”

Photo : Brad Chapman, living the connection between faith and politics