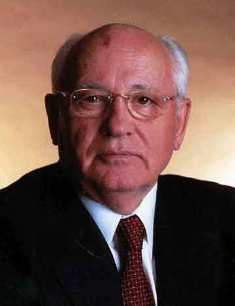 Although Mikhail Gorbachev may be a great admirer of St Francis of Assisi, founder of the Franciscan friars, and recently visited his tomb, the Soviet Union’s last communist ruler insists he still does not believe in God.

"I was and I remain an atheist," Gorbachev told Russia’s Interfax news agency last week. "I think religion is important for society, and I’ve willingly visited churches, synagogues and mosques during my travels. But it can’t be said I’ve done so as someone who believes."

Lithuanian priest Miroslavo Anuskevicius, who works at Assisi, told Italy’s La Stampa daily newspaper that Gorbachev had knelt in prayer for half and hour with his daughter, Irina, at the tomb of St Francis during a visit to the Roman Catholic shrine on 19 March, before touring the basilica.

"For me, St Francis is the alter Christus, the other Christ. His story fascinates me and has played a fundamental role in my life," the 77-year-old ex-communist was quoted as saying. "It was through St Francis that I arrived at the church, so it was important I came to visit his tomb. I feel very emotional to be here at such an important place not just for the Catholic faith but for all humanity."

However, in his interview with Interfax, Gorbachev denied he was now a practising Christian and dismissed the priest’s claims as "fantasy". "I visited this grave as a tourist, not as a pilgrim," the former Soviet Communist Party general secretary told the agency on 26 March.

Gorbachev launched the reformist policies of glasnost (openness) and perestroika (restructuring) after becoming the Soviet Communist Party leader in 1985. He reopened dialogue with the Russian Orthodox church in 1988 after seven decades of communist rule, and was widely credited with helping restore religious freedom before resigning in 1991 after a failed Moscow coup by party hardliners.

In October 2005, the Orthodox Ecumenical Patriarchate made the former Soviet leader an archon, or noble. He had previously given part of his 1990 Nobel Peace Prize to build a church at his birthplace of Privolnaya, near Stavropol, and later donated his parents’ house to the Orthodox parish in which it was situated for use by the local priest’s family.

On his deathbed in 1991, the former head of Czechoslovakia’s ruling party, Gustav Husak, received the sacrament of reconciliation from a Catholic archbishop, Jan Sokol. Earlier, Yugoslavia’s Josip Tito asked to be nursed by Catholic nuns from his native Croatia before his death in 1980.

In April 2007, former president Boris Yeltsin, another senior ex-communist, became the first Russian state leader to be buried with Christian rites since Tsar Alexander III in 1894.

Gorbachev, who maintained friendly contacts with Pope John Paul II after a historic 1989 Vatican visit, told Ecumenical News International in 1997 that he believed the Polish-born pontiff had contributed to his "understanding of communism" and was "the world’s most left-wing leader" in view of his reaction to "poverty, injustice and human misery, even though it is a gift from God."

The current Russian president, Vladimir Putin, who served in the KGB, part of the Soviet Union’s secret service, has built up very close ties between the government and the Russian Orthodox Church, and is often reported to have become a Christian believer.