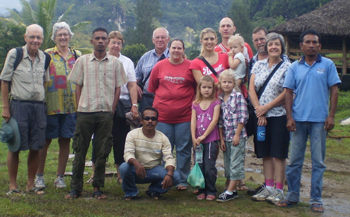 IN MAY Rev John Ruhle and Rev Tanya Richards led a team to visit projects in East Timor supported by Uniting Church congregations.

This included the work of the Timor Children’s Foundation which has its support base predominantly located in Queensland.

The Timor Children’s Foundation continues to be engaged in two long term projects: supporting the St Mary’s Children’s Home and the Scholarship Project.

During the crises in 2006 the Children’s Home was burnt down forcing the children to flee to the East. They stayed as refugees in Bacau, living in sub-standard conditions and sleeping on the concrete floor. In 2009 the Timor Children’s Foundation held an appeal to refurbish the home.

Mr Ruhle said through generous donations the appeal enabled work be done to allow the children to return to Dili and live and go to school in their own community.

“It was a joy to visit the children and their home and join them on a celebration picnic,” he said.

“We were able to meet with many of the students who are currently supported and it was humbling and a privilege to hear their stories,” said Mr Ruhle.

“Many of the students expressed their thanks to us and also to God for the support they have received to allow them to receive an education which otherwise would have been impossible to attain.”

For information or to support the Timor Children’s Foundation visit www.timorchildren.com